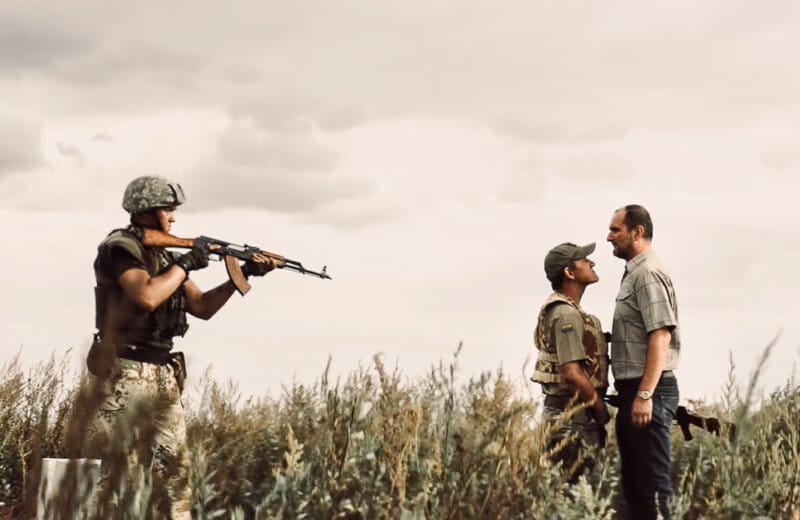 Ukraine’s Natalya Vorozhbit shows how women are exploited sexually and emotionally during wartime in this award-winning feature debut adapted from her play of the same name that staged at the Royal Court Theatre in London.

In 2014 Ukraine’s Donbass region was the setting for ongoing hostilities with neighbouring Russia. Women bore the brunt of both sides of the conflict, humanitarian rules were abandoned in the survival of the fittest. Bad Roads explores four episodes in very different settings detailing man’s barbaric treatment of the opposite sex during wartime.

At a casual road stop in the war zone, a headmaster (Koltovskyy) of a nearby school is trapped in a Kafkaesque showdown with two soldiers. The teacher clearly came out with the wrong passport, that morning, and the Kalashnikov rifle in his boot doesn’t help matters. He claims it is a toy model for teaching the students, but the militia men are suspicious. Then it becomes clear why the teacher is driving around: he is looking for a female student; after spotting her, he asks the soldiers to let her go: “You are saying that you defend us, but you are fucking our children. Please leave this one alone, she is an orphan”. The headmaster retrieves his passport and the Captain (Lelyukh), gives the him “the word of honour of an officer that there is no girl in the compound of the militia”. These assurances fall on deaf ears: Both know that he is lying.

Three school girls wait at a bus stop for their soldier friends who bring them cigarettes and cosmetics in return for sex. There’s nothing new in this transactional relationship, but it has a brutal edge as the girls know full well they may be lynched when the soldiers retreat. A grandmother (Matrosova) recounts the past when she and her friends sat on the same bench waiting for their boyfriends to come home from work.

In the most inhumane scenario a human rights journalist (Klimova) has suffers an attempted rape after being detained by soldiers one of whom (Kulinich) shares his childhood memory of a pet hamster who bit him so hard he made the animal drown in his own blood. War makes monsters of these men, death becomes meaningless “at first, you were glad that you were alive, but now there are no feelings left”. The episode ends shockingly.

A young woman (Baranovskaya) driving in the countryside accidentally runs over a chicken. She tries to compensate the old couple (Voronina/Solovyov), who think she has stopped for another reason. “Have you been raped? We can call the police”. They ask candidly. Later on the couple try to bargain with the woman, putting a priceless value on their hen. Bitterness and desperation turn ordinary people to irrational acts of mental cruelty. And there are no happy endings in Bad Roads: Later on the old people hear on their radio that a young local woman was severely injured when her car ran over a landmine.

DoP Voladymir Ivanov oscillates between hyper-realism in the Spa episode, poetic realism in the episode with the three girls and a bit of horror-treatment in the last section. The ensemble cast is brilliant, particularly the three girls, who are non-professionals. But the narratives are grim and unforgiving. Bad Roads is a Hieronymus Bosch painting come to life: utter depravity of mind and body.