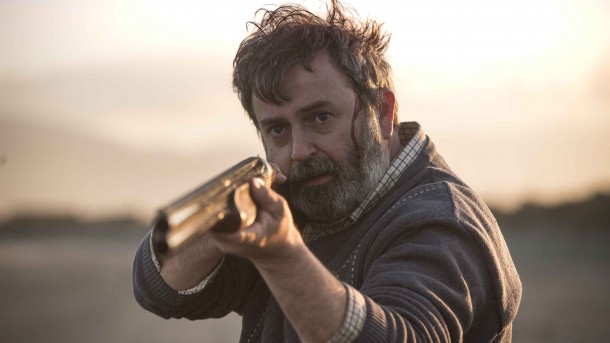 Farmer and part time motor mechanic Donal (O’Neill) lives with his mother Florence (McCusker) in Northern Ireland. After his mother is murdered brutally, her son goes out on a spiralling revenge hunt, digging deep into the IRA past of his family, and finding out about a sex-trafficking ring run by Frankie Pierce (Lynch) and her ‘consultant’ Trevor (Graham). Two of their henchman try to hang Donal, making it look like a suicide, but one of the assassins, Bartoz (Pawlowski), a Pole from Bydgoszcz, messes up with tragic  results.

The secrets of the past, personal and political, uncovered by Donal, are more than enough for one feature, Baugh doesn’t need to overload the narrative with a sex-slaves sidebar, giving the piece more than a hint of misogyny: although to be fair, the female gang leader Pierce (Lynch) is  far more deadly than her sidekick Trevor – whom she sacks in front of her little daughter in a rather hilarious scene – only Kaja (Prochniak), as the out and out victim, is shown any sympathy.  If you don’t mind gratuitous violence Bad Day certainly cuts the mustard, and looks good into the bargain with its convincing ensemble cast. As an exercise in innovative brutality, Bad Day wins hands down – with more domestic appliances than you can shake a blender at, but it’s pretty bloody as thrillers go. AS