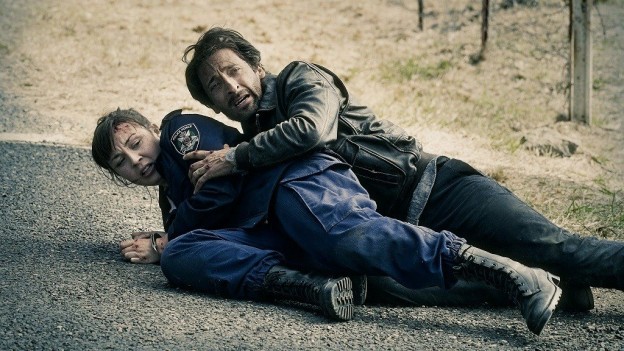 A rain-soaked Sydney is the setting for Michael Petroni’s schematic supernatural thriller where a bereaved psychologist is traumatised by visions of the past after the tragic death of his daughter. Adrien Brody is stunningly intense as Peter Bowers, the anxious but sympathetic therapist and Sam Neil is masterful and fatherly as his tweed besuited superior Duncan, offering professional support as he struggles to keep his sanity and marriage on track. The loss of his daughter opens him up psychically to a series of patients who appear to be ghosts from the past, including one who is a dead ringer for his little girl.

Off he goes to his family home in New South Wales to gain clarity. No one seems pleased to see him, least of all his heavy-drinking ex policeman father (George Shevtosv) or his teenage mate Barry (Malcolm Kennard). A series of flashbacks depict a local rail accident decades previously and memories start to resurface suggesting Peter was to blame for the accident and he quizzes his father who led the police investigation.

An atmosphere of mounting tension seethes throughout this slick and beautifully crafted thriller that makes good use of its Australian rural scenery and a haunting original score by Dale Cornelius. Despite the rather contrived plot that feels spookily familiar, Brody and Neil hold things together and the clever fractured narrative serves to keep us guessing why Peter is not the only person responsible for the train tragedy. Adrien Brody morphs into an impressive action hero in the final scenes managing the same appealing vulnerability that won him his Oscar for The Pianist. MT