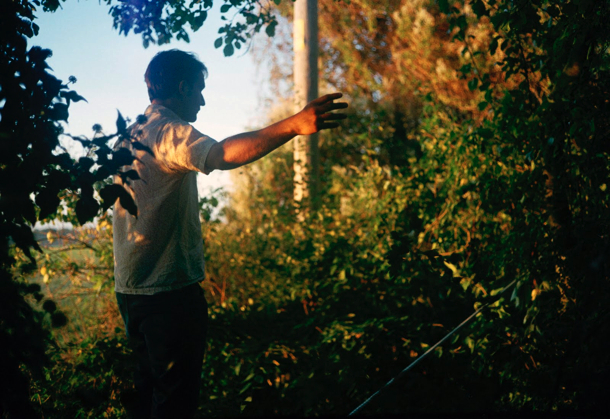 Even though it’s summer, the emotional temperature in BACK TO THE GARDEN is very much late autumn, much in the same vein as his recent outing LATE SEPTEMBER. A group of friends are visiting the widow Maggie, whose husband, a theatre director, died a year ago. The friends from the theatre milieu have gathered to bury his ashes under a tree in Emma’s garden in Kent. Whilst the women are aware of their responsibilities to Maggie, Julia’s womanising husband Jack takes the opportunity to make a direct pass at Stella, a younger actress, and a longstanding friend of the couple. Maxine, also in a relationship, meets her younger lover Ed, for one of their weekend trysts. Ed is the outsider of the group, he feels uncomfortable, and Maxine knows, that she has to make a decision soon about their relationship.

The maudlin atmosphere of the meeting is underlined by the claustrophobic sets: Maxine and Ed spending the night before the meeting on Maggie’s boat, cramped and anything but romantic. And the little cottage seems to suffocate the many visitors, the tiny rooms more like traps than living accommodation, make it difficult to breathe. Even the outdoor scenes are not joyous, the spaces seem confined, restricted, even though the protagonists praise the beauty of nature all the time. The camera shows exactly how the emotional turmoil of the participants determines their view of the surroundings: they project the “Endzeitstimmung” (Apocalyptic mood) on their environment. The atmosphere is never dramatic, but the underlining resignation is quiet deadly, served in small portions.

Apart from Ed, all the friends have been young in the seventies – they grew up with hopes of a different society, and feel somehow betrayed by the development, which leaves them as has-beens in a much harsher and unforgiving world. Therefore Maggie’s loss is a double one: she has lost her husband, their close relationship means that she has also lost a big part of her identity. She feels fragmented, a ship without an anchor. But on top, and this goes for the rest of the group, she knows that her time will come soon too, and that life has not been as fulfilled as hoped for.  Not a disaster, but a disappointment.  The women in particularly are victims of a professional environment, which is ageist and discriminates against their gender.  In contrast, Jack is the prototype of the ageing hippy with long hair and surplus vanity, who finds himself still very interesting at the age of nearly sixty, and has the professional and personal success to prove that arrested development and self delusions can get you a long way.