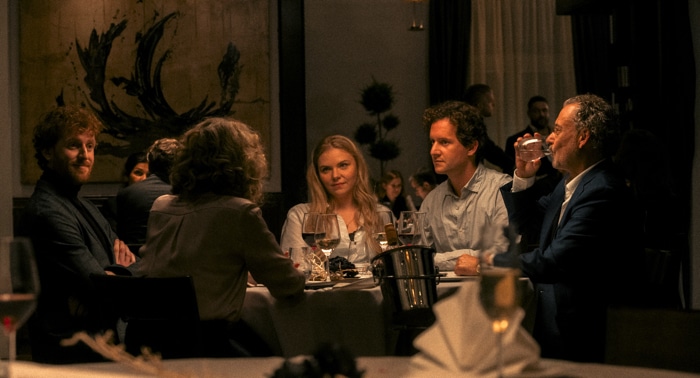 Moritz von Treuenfels is the captivating presence at the centre of Jöns Jönsson’s unconvincing drama that wants be intriguing but grows less so as it unfolds. Cutting a swathe through his friends and colleagues Treuenfels is Julius a suave young German from an aristocratic background who is working in a museum before taking up a scholarship in Tokyo.

But there’s something bogus and hollow about this tousle-haired cypher who lords over his friends and colleagues with his intellectual pretensions and glib repartee: Julius is not what he seems to be, yet he fills every frame with a hypnotic charisma luring us into a drama that  speaks volumes about outward appearances and the emptiness of surface charm. There’s nothing remotely interesting or likeable about any of these people; his one dimensional opera singer girlfriend Marta (Breuer) or her tutor Mr Langley (Plunkett). Julius’ friends are there to serve the narrative but do not stand out in any way.

This kind of drama is tricky to pull off successfully and sadly Jöns Jönsson is hoisted by his own petard: in creating a story about the vacuousness of modern ideals of self-reinvention, he axiomatically ends up with a film that feels as empty and unsatisfying as its premise and goes into a dead end. MT