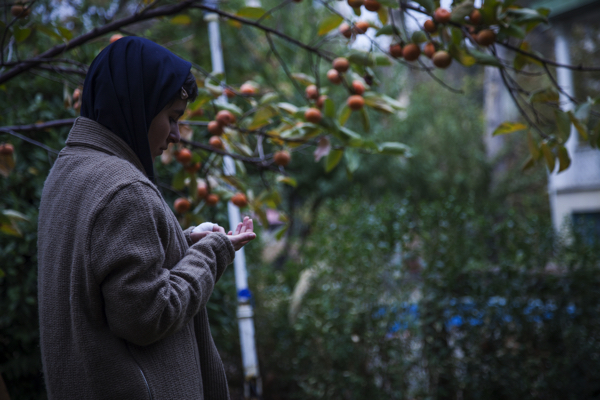 Born in Teheran in 1976, writer/director Sadaf Foroughi later went on to study in France and now lives in Canada. Her first feature Ava, is a coming of age story that won the FIPRESCI Discovery Prize at the 42nd Toronto International Film Festival for its depiction of teenage life in today’s Tehran.

Brilliant newcomer Jabhari plays the main character Ava, a girl from a comfortable background who rebels against her professional parents and her all girls school, where she is encouraged towards Science rather than the Arts, ironic as her father (Aghapoor) is an architect. She is keen on music and is competing for a place at the capital’s Conservatoire.

School days are never easy for teenagers and particularly in Iran’s restrictive society where young women are scrutinised at every turn. This provides plenty of dramatic potential for Foroughi to make the most innocent behaviour seemingly outlandish. Ava and her friends Melody (Sajadi) and Shirin (Alimoradi)  are no different from Western teenagers, and her parents’ marriage is clearly coming under strain like any modern marriage with today’s pressures.  The school’s supervisor Ms. Dehkhoda (Rashidi) is a bit of a martinet, who makes Ava’s life particularly difficult.  Her father is the more liberal of the parents, but he too claims not to understand his daughter and there is no physical contact between them, not even as basic as holding hands.

Ava has much in common with the features of Portuguese director Manoel de Oliveira (1908-2015): Sina Kermanizadeh keeps his camera static, the protagonists moving slowly around the frame, sometimes even leaving. Ava, is stubborn and wilful, very much like Ema in de Oliveira’s Vale Abraäo, based on the Portuguese version of Flaubert’s Emma. Foroughi is clearly influenced by de Oliveira, her heroine subject to the paternalistic constraints of Iranian society where women will always be under the control of their parents. In one scene, her parents discuss Ava’s failings – and their own marital conflicts, Ava meanwhile is packing her rucksack for school – only a thin wall separating them, but the teenager may as well not exist. Many of the authoritative admonishments are made in the third person: teacher and parents making announcement indirectly. A case in point is Dekhoda’s insinuation to the whole class, that “over-eating” is taking place in her school: “girls getting up at night, while everyone is sleeping and sneaking over to the fridge”.

Passionate but aesthetically restrained, Ava is a mature debut from a talented and assured newcomer. AS