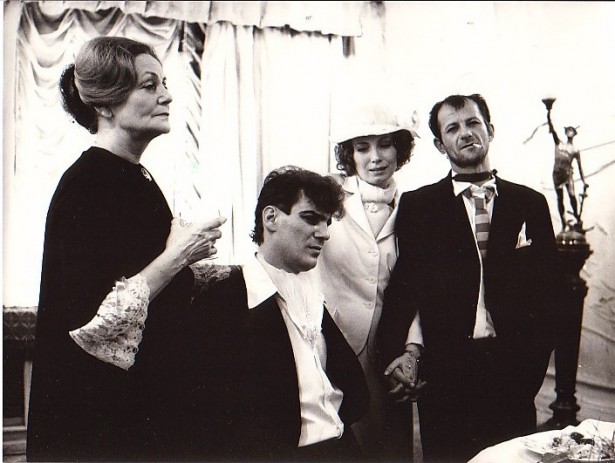 Autumn Almanac is a unique film in Tarr’s oeuvre: it falls between the end of his ‘Social Realism’ phase (The Prefab People, 1982) and the first masterpiece of his black and white epics such a Damnation 1988. Exceptionally for Tarr, it is also shot in colour.

A Pushkin quote in the opening credits sets the tone for Autumn Almanac: “Even if you kill me I see no trace/This land is unknown/The devil is probably leading/Going round and round in circles”.  Set entirely in a dilapidated villa, this melancholic ‘Kammerspiel’ traces the lives of five very despondent people who have given up contact with the outside world and are going round viciously in a circle of deceit and self deceit. The owner of the house is the matriarch Hedi (Temessy), a sick, lonely woman who is frightened that remaining four residents are only after her money. Initially, we may believe this to be a paranoid phantasy, but we soon start to join her in these negative thoughts. The nurse Anna ((Bodnar) – her carer, and her lover Miklos (Szekely) certainly look out for themselves and the couple’s sex life deteriorates throughout the film because of the increasingly claustrophobic atmosphere at home. Hedi’ son Janos (Derzsi) is too weak to admit that all he really wants is for his mother to die so he can inherit. And the old teacher Tibor (Hetenyi), just wants to steal enough from everyone to drink himself to death. Amid constant eavesdropping, the rooms have become sealed fortresses which are defended desperately. The five protagonists are full of self-glorification, believing their schemes will succeed because their attitudes are justified. After an easy victim is found at the end; and somebody asks innocently and without any irony: “If we lost trust in everyone, what would life be?” we know, that the Devil from the Pushkin quote has taken all, while the remainder of the residents in the house will go on in never-ending circles.

Shot by Buda Gulyas, Sandor Kardos and Ferenc Pap in expressionistic colours (which are literally unleashed on the audience), and different camera angles, Autumn Almanac is Tarr’s first ‘formalistic’ film. The rigour of later films; the long takes and the use of grainy b/w images are still a step away. Here, Tarr treats the residents like fish in a tank: he tries every possible angle to observe them with voyeuristic pleasure: at first, the camera peers subjectively through doors and windows, making the most ordinary actions look subversive. Then he changes, and uses crane shots, making everything distant and removed. Finally, he shoots from underneath the floorboards, creating distorted images that poke fun at all concerned. It feels as if Tarr can’t find enough ways to show the imminent decay. Yet it all ends in a glorious white light: somehow suggesting the newness of life in which the cycle will start all over again.
Autumn Almanac is also the first of Tarr’s increasing pessimistic films, showing units of society – here, the family – completely out of synch;  everything cruelly revealed in soulless, nihilistic and endlessly repeating circles. AS