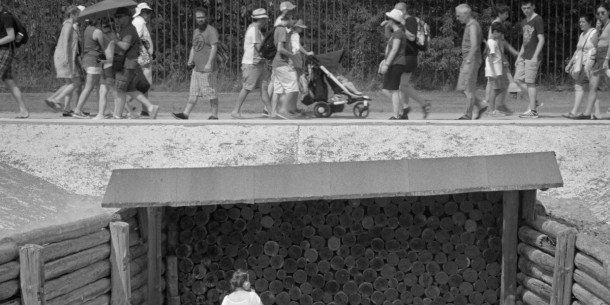 In a former Nazi concentration camp where tee-shirted tourists snigger, snack and shuffle with selfie-sticks, Ukrainian filmmaker Sergei Losnitza (Maidan) brings rhythm and rigour with his sober yet richly textured black and white portrait that a sense of sad irony at the banal contrast between the tortured past and the insouciant contemporary.

On the outskirts of Berlin, Sachsenhausen is now a memorial to the many thousands who met their death there. Set up as an interrogation centre during the Second World War; the Gestapo questioned prisoners of war in spartan conditions of near starvation and physical privation. The captives were then gassed alive in the showers and were later imcinerated in the vast ovens by a series of Sondercommandos (themselves prisoners) who were also regularly exterminated, although the final Sondercommando 14 unit left the site to tell their tale.

Using the burbling background of human chatter and the ambient sounds of nature as his soundtrack, Losnitza’s static camera records a typical summer’s day here in a series of long takes. The first sobering one lasts nearly fifteen minutes. Eventually a narrative emerges as we learn about the history of the camp from the (here) Spanish and American tourist guides whose desultory diatribes recount the events that took place during the Holocaust. Tourists look on, some in voyeuristic amazement. But for many the site seems just another picnic site in their daily agenda.

Contemplative and unsettling, Loznitsa’s film illustrates the spectacular banality and insuperable void between past and present. Although we look and learn can we ever really engage and comprehend the events that took place when many are faced with so many momentous tragedies of our own in the 21st century. Losnitza opens up the debate with his remarkable documentary.

Austerlitz takes its title from the final work by the German novelist W.G. Sebald. The film is a sober yet strangely satisfying piece: at the end we do feel as we have not only learnt facts but experienced the gravity of the momentous tragedy that went on here. While the film’s structure initially seems simple, each successive composition moves nearer to its subject allowing our thoughts to wander and engage with the horror of what went on during the world’s last war. MT