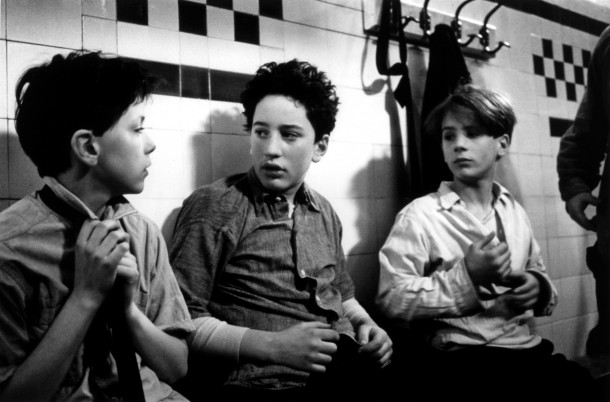 When Louis Malle returned from the USA to France in 1986, he was ready to start work on a project close to his heart since with he had become a filmmaker. AU REVOIR LES ENFANTS is a very autobiographical film, based on Malles’ experience in a Catholic boarding school in January 1944 when three Jewish boys, hiding with the consent of the padres, were denounced by a disgruntled kitchen help and sent to a concentration camp together with one of the teachers, Father Jean. None of them survived.

Malle had already tackled France under German occupation in 1974 with LACOMBE LUCIEN. But the role of French collaborators in the Holocaust, particularly the French police, is still a contentious issue today. When President Hollande recently commemorated the Round-Up of foreign Jews at the “Velodrome d’Hiver” in July 1942 and their subsequent deportation to the concentration camps, he mentioned –quiet accurately – that this was done by French men alone. The political storm was enormous – French history is full of praise for the Resistance, but the reality was that 99% of France collaborated with the Germans – closing their eyes to what was going on. Malle, very aware of the national repression of this period was adamant in an interview: “We all knew. And people who pretend that they didn’t know are just – well, we knew. I was not even twelve, and I knew. I remember my parents talking about it, how horrible it was.”

Similar to his narrative in LACOMBE LUCIEN, the traitor is a young boy with a grudge; somebody without a formed identity who could have equally ended up in the resistance but for circumstances and choice: Joseph is jealous of the privileged boys in the convent trying to be their friend and ally and helping them with their little black market deals. But when the teachers find out about their activities, Joseph, whose limp already makes him an outsider, receive the worse punishment: he is dismissed and informs the Gestapo.

Malle confessed that he only invented the character of Joseph. During his research for the project, he found out that such a person  had actually existed at the time of the arrests. However, he may not have been the culprit as some say the denunciation came from neighbours and others that an ex-student who had joined the resistance confessed to the crime under torture. There were contradictions and discrepancies, but Malle stuck with the Joseph figure who seemed to ring true. At the end of film, we hear Malle’s voice, declaring “that this was the key memory of my life, I thought about this every day since then, I will never forget it.”

Set during a grim January in 1944, this exceptionally moving yet unsentimental personal masterpiece garnered much critical acclaim including The Golden Lion at Venice 1987, a BAFTA and several Césars. AS

ON RELEASE AT THE BFI FROM 30 JANUARY 2015 AT BFI SOUTHBANK, IFI DUBLIN AND SELECTED CINEMAS NATIONWIDE.