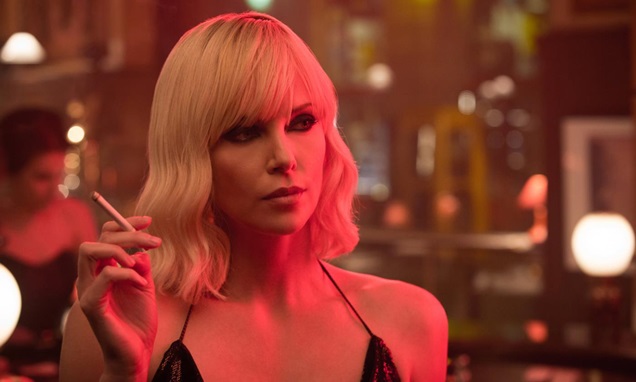 Charlize Theron tries to save MI6 while the Berlin Wall tumbles in David Leitch’s visually arresting contribution to the espionage genre that often takes itself too seriously trumping internecine intrigue with vitriolic violence. There’s one impressive scene but you’ll have to wait until the final moments to enjoy it so the first hour or so will feel in retrospect like treading water – albeit squally Neon-lit and stormy water.

As the heroine of the piece Lorraine Broughton, the blond (and occasionally brunette) –  bruised and battered – bombshell possesses the requisite steely resolve to convince audiences of her integrity but is often forced to curb her characteristic verve – while displaying her unrivalled sex appeal in scenes where she’s not crossing keys or juggling fake passports in this action-packed affair from the director of stunt cult classic Fight Club (1999). ATOMIC BLOND is based on Antony Johnson’s comics and Theron stars alongside a sterling British cast of James McAvoy, as her sidekick; Toby Jones as her handler; and a rather underwritten Eddie Marsan as a Russian defector.

We first meet Theron’s MI6 agent freshly bruised in a bath of ice. She is in Berlin for a progress report with her local bosses (Jones and John Goodman) updating them on her work to flush out a confidential list of British spies operating on the Continent. From thence the plot withers in a thriller that can only be described as Besson (pre-Valerian) meets Bond. At the end of the day, ATOMIC BLOND is really just a vehicle for Charlize Theron in a rather sketchy narrative that relies on action and her saucy kit to drive its rather sketchy ‘plot’ forward, seducing you with stylistic technique so you won’t notice the rather slim storyline which is just a prelude so sit back and enjoy the ride to the fabulous finale. MT