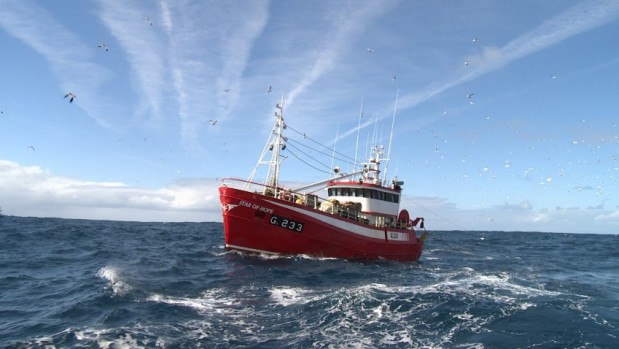 Once upon a time, fishing was seen as rather a precarious and romantic existence traditionally passed down through families who supplied local needs around the coasts and later further inland when fresh fish could be sent by train packed in ice to the large cities. But this all changed radically in the latter part of the 20th century: first multi-national companies, then globalisation ushered in a new era – not only for the work force, but also for the environment. ATLANTIC is a tale of three fishing communities in Ireland, Newfoundland and Norway. The stories vary from country to country, but they all share a gloomy outlook in common.

On Newfoundland, fisherman Charlie Kane speaks about the changes in his village, Renefs: Once 650 citizens lived here, surviving with 52 fishing boats. But in the early 1990s, the cod dried up, due to environmental circumstances and the appearance of Super-trawlers, forcing the local fishermen to struggle for an existence. Now Kane has a quota of just two tons of fish – as much as the family consumed in the winter months. His sons had to change professions: and now work for a multi-national oil drilling company in shifts of 21 days on and 21 days off. The money is good, but when they go fishing, now just a hobby, they think about the lifestyle they never had: videos from their childhood show them on the boats “being more in the way than helpful”. Charlie Kane died in 2014, and his sons are threatened with redundancy, after the oil price collapsed last year. After a long fight with Denmark, who are the de-facto rulers of Newfoundland and Labrador, the local population is ready for change, brought, again, from far away from their field of influence.

Jerry Early from the West Coast of Ireland, has just been found guilty of fishing outside Irish waters. He is going to appeal at a higher Court, but his chances are small. Ever since Ireland joined the EU in 1973, foreign vessels from Span, France, Germany and Portugal are allowed to fish, the Irish government sacrificing its fishing industry for access to the Common Market. But worse was to come: after oil was found in the Irish Sea in 1975, the government had learned from their mistakes and made the oil companies share their profits with the Irish Free State. Minister Justin Keating looked to the successful Norwegian model, and signed a contract where the profits were split equally, and the companies would pay a 50% tax rate. But this all changed again in 1987, when Minister Ray Burke re-negotiated the contract, very much in favour of the multi-national companies. The same Ray Burke, was later sentenced to six month in prison for tax fraud. Little can be done about the ‘super trawlers’, who seem to break all laws. On one of them, the Jan Maria, the logbook stated that 9000 tons of herring was caught. But it later transpired that only 5000 tons arrived at shore, the ship releasing 4000 tons of smaller fish back in the water. But the fine was more symbolic: the captain had to pay a laughable sum for false bookkeeping.

Bjorn Nicolaisen might be the luckiest of the trio because Norway has invested the wealth from its oil boom into a modern and wealthy society, making sure that the companies did pay their fare share to the nationally owned Statoil company, and the last incoming government set up a moratorium of four years for further drilling in the Norwegian waters – but the fishing industry has suffered considerably, since the companies started exploring the waters with a blast technique, which, as Heike Verter, a marine biologist explains, makes the fish disappear for hours. Already Skate have completely vanished. Further changes for the worse are expected, when the government moratorium comes to an end later this year.

Narrated by Brendan Gleeson, ATLANTIC would make a great pairing with Leviathan (2012) that shares its grim message: between the profiteering companies, weak governments and environmental threats, an old industry is dying. It is not just the fishermen who lose their jobs and homes: we are losing a valuable natural resource that feeds our population because the way it is run now is totally unsustainable.