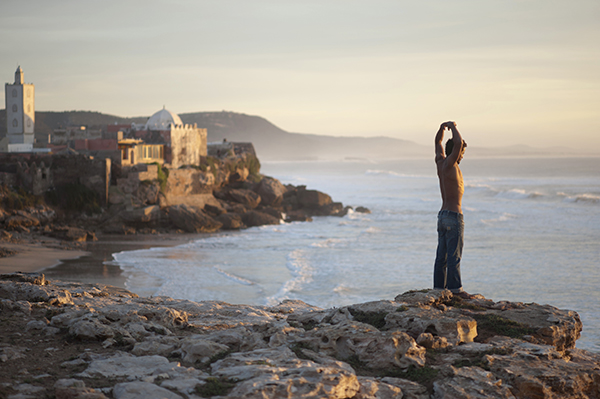 Some films are likeable because they stand alone and do not fall in any category or genre, or attempt to reach out to a certain target audience. In dreams, we cannot figure everything out, but can be nevertheless enthralled.

Fettah (Lamara), a young man in his early thirties, lives in a poor fishing village in Morocco where he helps his father on the boat in winter and works as a guide for the European surfers in summer.  A dreamer, Fettah wants everything he cannot obtain. There is his grief for his mother, who drowned when he was seven. Then there is Wisal, a young girl in the village who wants to marry him but Fettah again wants what he can’t have: Alexandra (Reuten) who is already spoken for by Jan (Ewijk). The pair are staying in Fettah’s house during the summer and he becomes infatuated with Alexandra who has his mother’s eyes. After the couple leave, Fettah sets on his surf board to journey across the ocean, not so much in search of Alexandra (he doesn’t even have her address), but to get away from all the poverty. He soon discovers that he is just another emigrant, trying to get to Europe.

The all-present voice over, whispering, accompanies Fettah on his 180 mile journey across the ocean. Flashbacks help to put connect the real characters to the voice-over, which seems to draw Fettah more and more into himself, the further he gets away from Morocco . The hypnotic voiceover is accompanied by to sumptuous visuals – a mixture of wildness poetic languidness – from DoP Jasper Wolf. Fettah’s loneliness is occasionally relieved by fishermen, sharing sardines with him, but nobody can help him when his equipment starts to fail.

The simple storyline allows the audience to become lost in the images and Piet Swert’s score, making this a transcendental journey with a starting point, but no concrete goal – but then dreams often have no proper endings. ATLANTIC sometimes sails very close to pretentiousness, but the harsh environment is always there to remind us of the ever-present danger. Fettah’s identity, perhaps as unknown to him as to us, is best put in words that also describe the whole film: a wandering spirit in love with the sea and dreams, reality taking second place to something only to be felt: An absolute original.AS