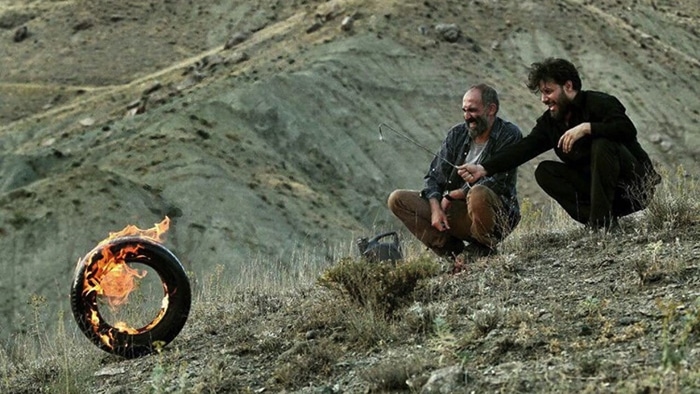 The Iranian countryside is the setting for this visually vibrantly but brooding feature that sees modern and traditional values colliding for Kazem (co-writer Had Hejazifar) a middle-aged man who left university without completing his architecture studies, and is now designing holidays villas for the rich and powerful who he desperately resents.

Kazem often resorts to physical violence, his secretive past seems more meaningful to than the present and he has not moved emotionally after an unhappy relationship during his student years, although he has changed his name from Atabai. He has never forgotten Sima, the most attractive woman on campus, and has not been able to have another relationship since their break-up.

Kazem’s emotional centre is his nephew Aydin (Noorvash), but he is unaware of  repressing the teenager, who has internalised his uncle as a Super Ego. Aydin has grown fond of Jeyran (Robaninia), but  is much more interested in the much older Kazem: “Marry me and get me out of this village” she implores Kazem,  Kazem’s relationship with his own father (Daryadel) is fraught to say the least. It will get even worse, when Kazem learns, that his father has sold an orchard to the realtor Parviz, whom Kazem blames for the death of his sister Farokhlagha, who set fire to herself at the age of fifteen. Kazem explodes, blaming his father for “selling” his daughter to a man of his own age, to pay for his opium habit. Parviz has two daughters, Sima (Dolatshahi) and the much younger Simin (Meynoosh), who are on a visit to the orchard. Aydin falls for Sima, but ends up at the wrong end of Kazem’s violent tantrums: “You have disgraced the family, this man murdered my sister”. But then, the wife of Yahya (Ezzati) dies, and Kazem and the bereaved husband, best friends for a long time, have the first serious talk for years. We learn, that Yahya had a relationship with Farokhlagha, with Kazem making sure, that the two could meet in secret. When Yahya told Farokhlagha, that he would marry his cousin, she told him, that she would commit suicide by setting fire to herself; with everybody believing, that she killed herself it to escape Parviz. Both men have much soul searching to do, particularly Kazem, who is falling in love with Sima, who by coincidence, shares the first name with Kazem’s great love. But will he be able to care more for the present than the past?

DoP Saman Lotfian has created a wide-ranging palette of colours for the outside action, whilst his close-ups of the the heavy emotional battles are set against the background of a landscape, which is never idealised. Somehow, the two go together, and Kazem finds no solace in being home – still hankering for Tehran. Karimi is very self assured regarding the aesthetically choices, but she is overloading the feature with too man conflicts; ATABAI does not always flow easily, and one has the feeling of an overly constructed structure. Still, it is a well worth a watch. AS