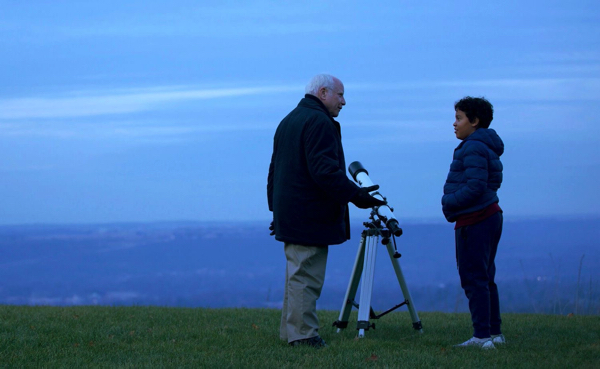 Hollywood star Richard Dreyfuss plays a thoughtfully mellow grandfather who proves he is not yet over the hill in this rather slow-moving subdued look at second chances in life.

Astronaut is a decent debut for Vancouver-born writer-director Shelagh McLeod who rose to fame in Dennis Potter’s Prix Italia winning Cream in My Coffee and the popular TV series Peak Practice. Her tender family drama returns to the timely topic of care homes, where not everybody is in God’s waiting room: Far from it, as Dreyfuss shows as Angus Stewart a laid back seventy something widower who still has plenty of life left in him – not to mention acerbic wit –  despite having to live with his drab daughter (Krista Bridges) and her husband (Lyriq Bent). Luckily he shares an interest in all things astronomical with his perky grandson Barney (Richie Lawrence) who encourages him to enter a competition to go to the Moon, his cherished dream. And Dreyfuss surprisingly wins, despite being moved to a retirement home before his luck comes good.

Well that’s the essence of the story, but in between there are insightful forays into the care home scenario, something that was more successfully achieved by Tamara Jenkins in Savages (2007). That said, McCleod sketches out the territory with its motley crew of usual suspects, all enduring their plush but dysfunctional surroundings with good nature.

Meanwhile, the intergalactic competition is the brainchild of technology tycoon Marcus (Colm Feore). Strictly for the 18-65 group (they’re clearly more positive in Canada than Britain about ageing) although Angus doesn’t qualify Barney supports him. And like most people, this grandfather would rather die dangerously than slowly slipping away without dignity. As a retired engineer, Angus makes clear to Marcus his misgivings about the project, the two sparring over the feasibility of all, a strand that gives the film some gravitas.

Astronaut is a little bit glib and a little bit chintzy at times, but it works best as a muted story of   familial cosiness feeling real in homely winter-bound Ontario. And although the script is thi on the ground giving no surprises in store, Astronaut is best described as ‘heart-warming’. MT