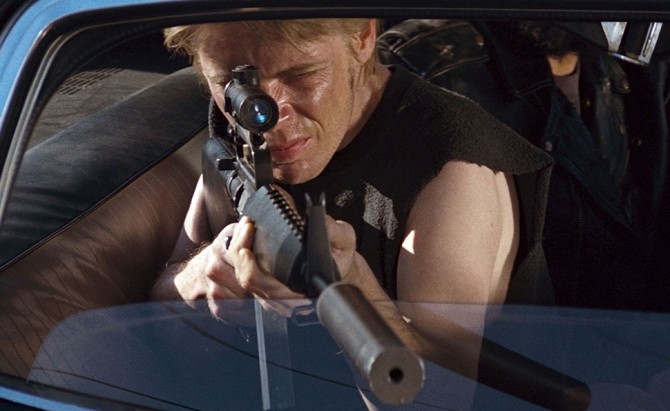 John Carpenter’s prescient action thriller Assault On Precinct 13 burst on the screen in 1976, sending out a warning message that no one was safe in our increasingly violent world.

Inspired by Howard Hawk’s Rio Bravo (1959), Carpenter’s pared down indie stars a terrific Austin Stoker as police officer Ethan Bishop who is commissioned to work in a rundown backwater of Los Angeles in a station threatened with closure. The action kicks off when a little girl (Kim Richards) buys an ice cream from a nearby vendor in a blue truck. Going back to change the flavour, she is shot dead by vicious sniper who immediately leaves the scene. It emerges he escaped from the police bus that stopped in the area after one of the prisoners felt sick. Teaming up as an unlikely duo, Bishop sets to work with the smart-assed criminal Napoleon Wilson (Darwin Joston) to defend the police station as it comes under attack from a gang of nihilistic felons seeking revenge on the death of one of their members by LAPD. With no power and telephone lines to the station, the place becomes a dark and dangerous crime scene, as circling police cars wonder what the hell is going on. In this lean, mean crime thriller. Joston turns in an effortlessly cool performance as Napoleon, saying very little apart from demanding a cigarette with the comment: “I am an arsehole, you can’t take everything away from me”. At first the two women characters are weak but Laurie Zimmer soon finds her metal as Leigh, a police woman who gives as good as she gets. Carpenter’s own intermittent score kicks up enough energy and spunky tension as the bullets fly in the claustrophobic semi-darkness of this man-made Hell. ASSAULT ON PRECINCT 13 is a tightly scripted 1970s crime classic which made Carpenter one of the luminaries of genre filmmaking. MT.