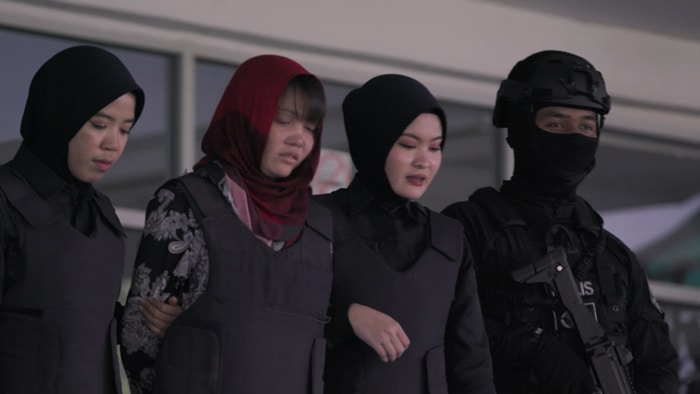 In an extraordinary story of deceit and subterfuge Assassins travels from Pyongyang to Indonesia, Vietnam and Kuala Lumpur to investigate what really happened to Kim Jong-nam, the older half brother of the North Korean dictator Kim Jong-un who lost his life nearly fours years ago.

This story of a public murder, filmed in the grainy footage of CCTV at Kuala Lumpur International airport on 13.2.2017 is as bizarre as it is mysterious. American director/writer Ryan White (Ask Dr Ruth) has chronicled the murder case and the ensuing trial, the upshot is no   cause celebre but a very human story, involved a calculating dictator and two ordinary women.

Photos show a middle-aged man in the airport hall, suddenly being attacked by two young women seemingly rubbing some substance into his eyes before running off, openly looking at the CCTV monitors. The man stumbles on and is taken away by airport security, the two women taking separate taxis back to the city. The victim was Kim Jong-nam. He would die twenty minutes after having been smeared with the deadly nerve gas agent VX. The two women are identified as Vietnamese Doan Thi Huong (28) and Indonesian Siti Aisyah (25), who would soon be arrested for the murder, facing a trial and a certain death sentence by hanging, if found guilty.

Kim Jong-nam (*1971), the oldest son of former North Korean dictator Kim Jong-il, was seen as his eventual successor. But after a scandal regarding his visit to Disneyland Tokyo in 2001, his brother Jong-un took over the regime after the death of his father. Kim Jong-nam, who had renounced any participation in the government of his country, had survived at least two assassination attempts, one at Ferihegy airport in Budapest in 2009, another one in 2012.

Both women “assassins” came from a rural background, where the director visited their distraught parents. Doan had moved to the capital Hanoi, went to college and moved in search of fame to Kuala Lumpur, wanting to become an actress. Siti’s CV is much more dramatic: she had worked in a clothing factory in Jakarta, married the boss and had a daughter at age seventeen, which she lost to her husband after a divorce custody battle. She became a sex worker, still dreaming of fame. Both met a chauffeur called John who promised the women easy work: Video pranks, reminiscent of the “Jackass” trilogy. The payment of nearly 100 US Dollar was good, and preferable to sex work. What happened next is recounted by journalists Hadi Azmir (Bloomberg), and Anna Fifeld, chief of the ‘Washington Post’ in their Bejing office. The operation was masterminded by Mr Y, also known as Hanamori, and a chemist Ri Jong Chol, as well as the Godfather OJong-Gil, all members of the North Koran Secret Service. An airport employee Kim Uk Il was also part of the deadly plot, all operatives got away to North Korea, leaving the two women to fight for themselves.

Their mobiles did not contain any links to North Korea, just rather sad accounts of video pranks which were anything but professional. But the Malaysian government was only too happy to have found two scapegoats who fitted the bill. The trail began on 2.10.2017. The court judge was clearly biased, and Siti and Doan feared for their lives, but what happens next is hardly outlandish but certainly emotionally overwhelming.

DoP John Benam’s camera adds to the tension fly-on-wall camerawork, the ‘Talking-Heads’ often reduced by voice-overs. Although the outcome is positive it could have been quite the opposite. What is shocking is the audacity of the North Korean agents who blithely set people up for the death penalty, with scant regard for their human rights. “They treated us as if we were nothing” comments Siti, in a fitting last word. AS