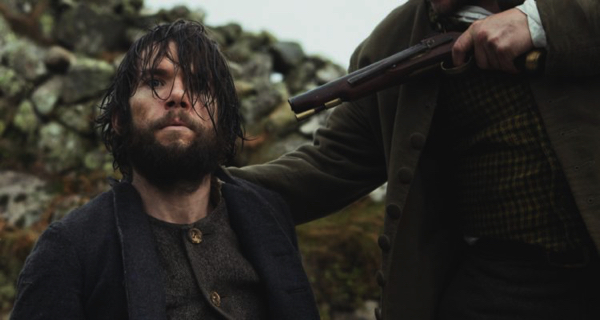 Tom Sullivan sets his melancholic feature debut in 1845 Ireland, just before the outbreak of the potato famine known as the Great Hunger. A fisherman gives sanctuary to a stranger at the behest of a local priest. This former soldier arrives just ahead of ‘the blight,’ a disease that eventually wipes out the country’s potato crop, contributing to the death and displacement of millions.

Narrative-wise this is a nebulous and enigmatic mood piece that recreates this unsettling period of Irish history, helped along by a brilliant cast and the haunting intensity of its remote countryside setting in the costal region of Connemara. Donall O Healai is particularly impressive as the dogged Colman Sharkey who lives with his wife Maggie (O’Dwyer) and young son in a small but cosy coastal cottage. When the local priest introduces him to Patsy (Devaney), who might be a deserter from the British Army from the Napoleonic Wars, Colman takes him in. It soon becomes clear that Patsy has an uncontrollable temper: when Colman is visited by two British soldiers collecting the rent for the British landlord, he explains his reluctance to pay as – like all the other locals – he has been forced to sell his fishing boat and is nearly starving.

So Colman pays a visit to the English Landlord’s lavish abode to request a stay on rent increases that predicted to destroy his community. His request falls on deaf ears and Patsy’s subsequent actions set Colman on a path that will take him to the edge of survival, and sanity. After the mayhem Colman then takes refuge in a sea cave, where near starvation sends him to the edge. It is only upon encountering an abandoned young girl called Kitty (Ni Chuinn) that Colman’s resolve is lifted. Just in time for the darkness of his past to pay another visit.

Sullivan relies on symbolism is this often surreal fable with its striking visual allure, and echoes of poems by Seamus Heaney, and Defoe’s lyricism. AS