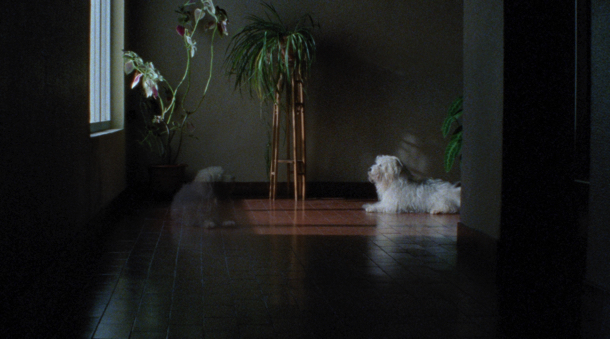 Writer/director Gomes continues on his path of re-writing Scheherazade’s classical stories of Thousand and One Nights with the second part of his trilogy: The Desolate One. After the overwhelming opening salvo of the first part, The Desolate One is perhaps the most audience friendly of the trio: full of humour, self-irony, satire and much less hectoring, the streamlined second part consists of three fables outlining the disgruntlement of  Portuguese workers during the financial austerity in the early 21st century, and connecting the present with the past.

Told with subtle irony by Scheherazade (Alfaiate), sometimes residing on a Ferris Wheel, the first tale Chronicle of the Escape of Simao – ‘Without Bowels’ is a gem. Simao (Chapas), an ageing farm worker, who earned his nickname for his life long anorexia, has murdered four women, among them his wife and daughters, and is on the run. In his hideout in the wilderness, he dreams about prostitutes and great banquets. But in spite of his crimes, he becomes a local hero for his Robin Hood style redistribution from rich to poor. Scheherazade blames his crimes on capitalism: “Evil is only a severe tendency of selfishness”.

The second story, titled “The Tears of the Judge” is a burlesque courtroom romp, where the severe judge(Luisa Cruz) presides over a case which starts out with the theft of 13 cows and continues, taking in a series of Chinese mail-order brides, a genie and a machete-wielding human lie detector. The stern judge, who almost loses it due to the complexity and buck-passing of the various witnesses and scenes involving her daughter, who has recently lost her virginity to a man selected by her mother, assuming a guise of domestic servitude which she then relegates her duties. This seems to be a metaphor for continuing misogyny and racial stereotyping in contempo Europe (yet it’s even worse in continents such as Africa, South America and India).

And, if matters aren’t complicated enough, this is the segment that won the ‘Palme Dog’ at Cannes 2015 for Dixie, the Maltese poodle, who here is passed on from one tenant to the next in a housing estate, where even the human residents have difficulties feeding themselves. Somehow there are shades of Chekov in this episode: the eviction notices spread a collective outpouring of melancholia.

Again, DoP’s Mukdeeprom’s sun-dried images are the highlight, producing serenity and beauty in spite of the poverty. Shot on 16mm and 35 mm, his work proves that our eyes, like the film stock, work on an analogue basis. The depth of these images is impossible to recreate with digital, however brilliant the HD. Gomes always tries to change, double and exchange the perspectives: This happens on the levels of images and sound, the mixing of documentation and fiction, the (sometimes overdone) multi-lingual components (which make this part particularly challenging for non-Portuguese-speaking audiences) and finally, in the episodic structure of the whole trilogy, where the actors participate in different episodes underlining the concept of total exchange. The Desolate One is made of legends: yesterday’s and today’s are finding a common platform where Gomes’ poetic realism steers his often unwieldy project to safe shore. AS