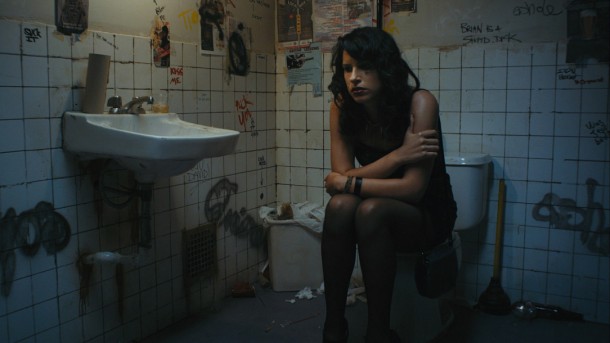 After being voted ‘the ugliest girl’ at her school when she was fourteen, first time writer/director Desirée Akhavan wrote a play about it and from then on found a way to cope with life’s setbacks: “Telling stories is how I process life”. Her first feature APPROPRIATE BEHAVIOUR shows that there is a great deal to process.

Shirin (Akhavan) is the daughter of upper-middle class Iranians in New York. Whilst her family display all the outward appearances of success, Shirin struggles with her bi-sexuality and keeps it a secret from them. This may be have been one of the reasons her relationship with Maxine (Henderson) came to an end, since her ex-partner tried to push Shirin to “come out”. Most of the film is dedicated to this relationship and its aftermath. Shirin’s hunger for sex leads her into awkward situations: picking up a rather compliant male, she demands to be dominated, and the man takes flight. On another occasion, she is picked up by a couple but the ménage-à-trois never gets going, the other woman suggesting they play “Monopoly” instead. Shirin’s professional life is equally in disarray: she is supposed to teach a group of six-year-old boys how to make a video, but is overwhelmed by their obstructive and chaotic energy – whilst next door the girls of the same age group are only too willing to stage a remake of Hitchcock’s The Birds. Not surprisingly, Shirin’s class finishing film is titled The Fart. The gags come fast and furious, but utter absurdity and old-fashioned melodrama don’t always go together. And when Akhavan finally takes a breather in the last scene, it feels like a cop-out.

Playing the lead in her own drama – far from being ugly and a brilliant actress to boot – Akhavan’s debut feature suffers mainly from its weak screenplay, which is rather unstructured and episodic, the numbers being often hilariously funny in themselves, but lacking any dramatic coherence: it is more a revue of the funniest/saddest moments in the life of Shirin. The rather clumsy and prudish sex scenes do not help. Overall Akhavan shows that her heart is in the right place, but that an emotional outcry is not enough to make a successful feature film. AS