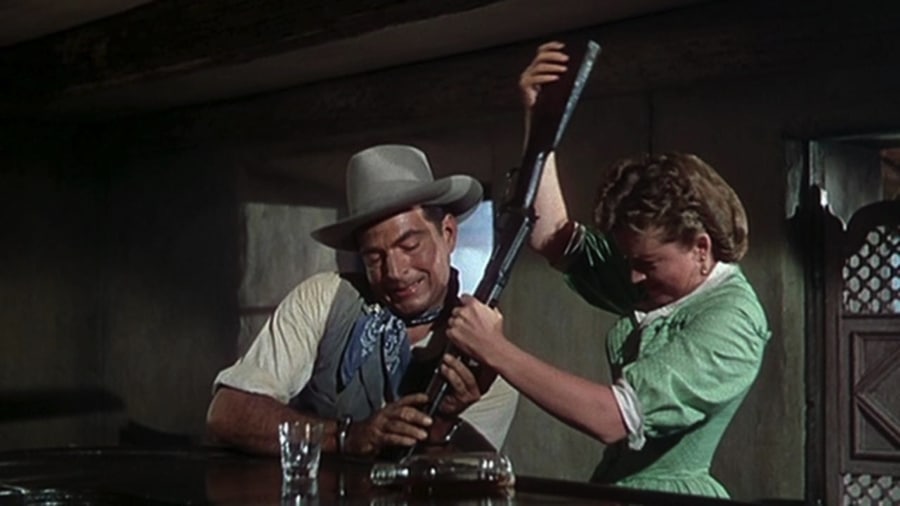 Growing older makes you release just how shockingly young some of cinema’s luminaries were when they passed on (I have now outlived Max Ophuls by seven years, for example) and that Val Lewton was practically a boy when he exited film history aged a mere 46.

Lewton’s next move would have been to join Stanley Kramer at Columbia, but (having just tread water with two duff programmers for Metro) he went out on a high note with this, his only western, for Universal, that strikingly anticipates Zulu (right down to those under siege bursting lustily into ‘Men of Harlech’) and Assault on Precinct 13.

It was also his only Technicolor production and the potential for colour to heighten thrills is adroitly exploited in judiciously applied splashes of colour, like the green dress heroine Coleen Gray wears and the war paint the attackers come covered in when dramatically hurling themselves through the windows. Those almost expressionistically stylised windows (often visible in the background preparing us for attacks that don’t necessarily come) gradually change colour as the sky goes orange from Spanish Boot ablaze, and night becomes dawn (like the Manhattan skyline in Hitchcock’s Rope) until the door itself is finally devoured by flames when the final onslaught eventually arrives. Richard Chatten