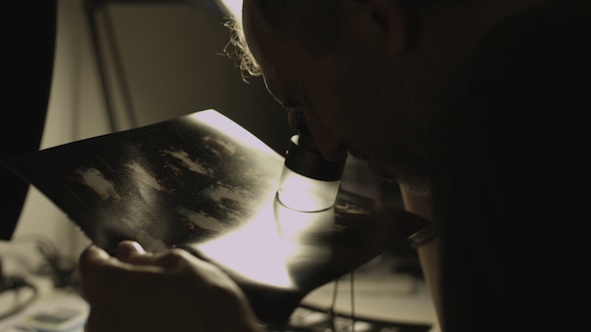 For those of you that don’t know, Anton Corbijn is a highly industrious photographer turned lauded filmmaker who, through the use of his camera, helped to create the brands we now know as U2, Lou Reed, Joy Division and Depeche Mode, amongst many others.

This mostly subtitled Dutch documentary by Klaartje Quirijns spends time with the photographer at his studio, on the set of The American with George Clooney, at his childhood home and with his immediate family; his mother, sister and brother. There are also brief interludes with the likes of Bono, Metallica, Lou Reed and Arcade Fire.

It is without doubt an in-depth, frank and open discussion held with an artist whose work must inarguably be accepted as trailblazing and iconic. He is a man driven to the exclusion of all else by his work, finding both camera and music at a young age and pursuing both thereafter as his passion; his raison d’etre.

Inside Out also dwells briefly on the two films he has made; the very excellent debut Control and the not so sublime The American, where there is a perhaps telling scene between Corbijn and his lead actress concerning the interpretation of a line in regards to her character. He is most definitely a visual man rather than a dramaturg.

Quirijns shines a light on the hitherto hidden recesses of Corbijn’s life and life-story and Corbijn is both brave and open in his revelations; the son of a preacher man from a small Dutch village, as he is. But the story of an unhappy childhood, distance from his parents, of loneliness and the analysis of why he chooses the shots he does only serve to reduce rather than enhance the legend.

It is indeed therefore a very insightful film that reveals the man behind the myth, but actually in the end, I simply wanted to admire his many, beautiful portraits telling their thousand words and not hear Corbijn admit that the reason he chose the side of a tanker with a huge steel cable draped like a smile, was that it depicted ‘heavy metal’ for the Metallica shoot, or learn that he, like so many of us mere mortals, is still running around seeking his fathers approval and feeling incomplete as a man.  On top of this, the banality and ineloquence of various smug pop stars waxing less than lyrical over photographs of themselves only made me reflect that perhaps it’s a case here of not actually wanting to meet ones heroes… Some people or things are great because of their mystery; some pictures wonderful as much for the personal lens through which we view them. AT