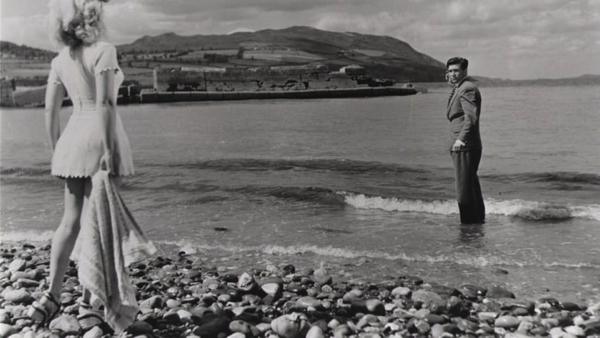 Robert Beatty leads a sterling British cast in this upbeat bit of Ealing whimsy that sees him dreaming of the South Seas during an inclement postwar Dublin summer. Although the story is rather slight (based on Kenneth Reddin’s novel) the theme of escapism is a universal one – particularly at the moment when everyone is cooped up at home due to Covid.

On his daily walkabout in Dublin, Gulliver Shiels (Beatty) meets a variety of different characters – and  characters is the operative word. There is poor old Mrs Gleeson (Delaney) who sells newspapers; an alcoholic called Moore (Wilfrid Brambell) whose dog Gulliver adopts, Michael Golden as a police detective; he also makes a drinking friend of Michael Medwin’s Yellow. A chance encounter with a wealthy alcoholic (an elegant Stanley Holloway) offers him the chance to realise his adventure, but eventually he plumps for Moira Lister’s bored but wealthy widow in an unconvincing trade-off.

But the main reason to see Another Shore is for Dublin itself which is very much the star of the show. DoP Douglas Slocombe creates a magnificent sense of place in and around the Liffey, St Stephen’s Green and Merrion Square which glow in his immaculate black and white photography. Ealing costume designer Anthony Mendleson creates some rather dapper costumes. MT.

On BLU-RAY and PRIME VIDEO