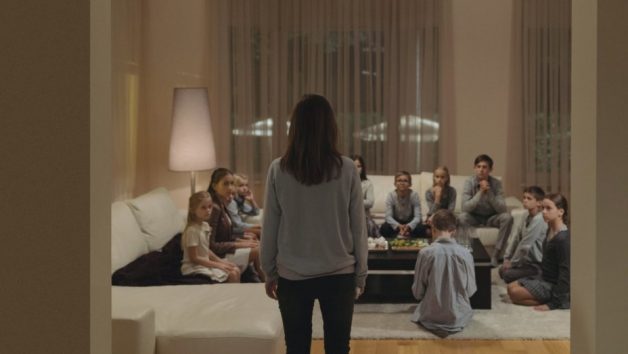 This stylish Czech thriller centres on a secretive religious sect known as the Twelve Tribes. It is the impressive feature debut of Czech filmmaker Michal Hogenauer who offers up a cleverly crafted piece of evil in the guise of a domestic drama filmed in the forested stillness of suburban Riga, beside the Daugava river.

Eliska Krenkova plays Mia a young au pair who has emigrated from Prague to work in the pristine household of a formal professional couple (Hendrickx and Fernhout) who have one precocious little son, Sebastian (Jutte). Their house is immaculate, sterile even and Mia is not encouraged to become familiar with the parents or the boy. And although she stands her ground and refuses to be intimidated by their frigid demeanour, she soon becomes more and more worn down. Hogenauer employs a clever plot device that adds suspense and intrigue as the story plays out, by intercutting the action with scenes of Mia being interrogated by a faceless authority, presumably the police. It’s as if a crime has already been committed.

Sebastian is being trained to become a professional tennis player, and his parents take his progress very seriously. Their controlling behaviour also extends to Mia – who is actually called Mishka until they force her to accept a new nickname, just to add to her discombobulation. Mia’s presence is also required at unsettling social get-togethers (which turn out to be cult meetings) where she meets and becomes involved with a new boyfriend (Ijgosse). Soon the plucky and confident Mia finds herself drawn into a strange and sinister set-up where the gaslighting couple coerce her into doing things against her will, as they manipulate her mind. They force her into beating Sebastian, who eventually stabs Mia in retaliation. The flesh-wound is not life-threatening, but Sebastian is suddenly replaced by Daniel (Rendl), who wears a five-digit number on his back – we have already witnessed that Sebastian’s school is Number 23, and the school bus, which takes the children ‘off piste’ to school in a mystery destination. DoP Gregg Telussa captures the clinical atmosphere in the house with slickness doing justice to Laura Dislere’s immaculate set design, a paradise for those with OCD. All this is amplified by Filip Misek’s minimalist sound design which echoes something Philip Glass might compose. Hogenauer directs with great sensibility, never going over the top, by showing this ghastly utopian reality with restraint and admirable rigour. AS

The Twelve Tribes is a new religious movement founded by Gene Spriggs and was originally founded in Tennessee with the aim of raising 144,000 pure boys, so that Jesus can return to Earth. The children are corporally punished when showing emotion, playing or committing a disobedience. A raid in September liberated over 40 children from the organisation, who also run youth hostels, farms and restaurants.