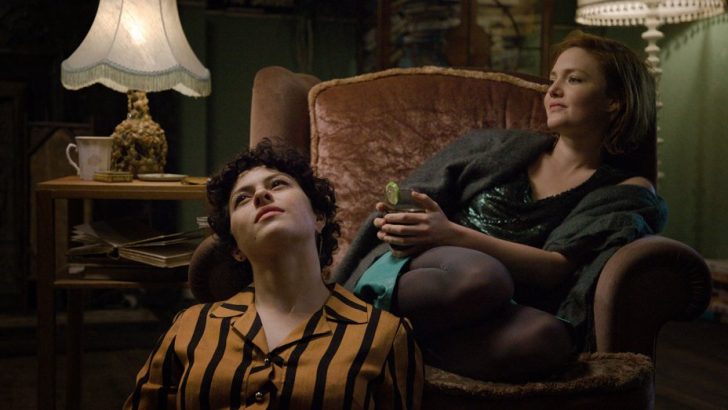 In her sophomore feature Australian filmmaker Sophie Hyde (52 Tuesdays) directs Emma-Jane Unsworth’ script of her own novel. It centres on two close friends Laura (Grainger) and Tyler (Shawcat) in Dublin who spend most of their time in being drunk and high on drugs. Well at least that’s the way it’s seemed for the past ten years. But now in their thirties, things are about to change.

Their story unfolds from the perspective of Laura, a struggling writer whose novel progresses a line a week – meanwhile she works as a barista in a coffee shop, to make ends meet. Her sister Jean (Molloy), once a wild child herself, announces that she has now chosen adult life and motherhood. Laura reacts with panic: suddenly casual boyfriend Jim (Fee), a very serious pianist, becomes a plausible alternative to her living the life of Riley with Tyler. But then along comes uber-pretentious author Marthy (Murphy) and Laura soon sees the error of her ways. And somehow the never fully explained cloud over Tyler’s life (some trauma in the past) becomes more important – or is it just the realisation, that their friendship is much more of a love story then they want to admit. Most features are built on the rock of a happy-ending with friendship being replaced by the great love conquering all – but Hyde raises doubts: is it really inevitable that all women should spend their life with the opposite gender just because mother nature and a concept called adulthood dictate it – or can Goethe’s Elective Affinities overcome the norm – at least sometimes?

Grainger and Shawkat carry the feature – their relationship is anything but ideal – but at least it is honest, and we are never allowed to forget it. Hyde directs with great sensibility, athough there are more than enough emotional episodes to go round. DoP Bryan Mason has a fine feel for the Dublin scene, even though the film actually takes place in Manchester. Animals is full of surprises and never resorts to the banal. It is a brave attempt at trying to align the impossible, but it manages to remain sincere: when Jim calls Laura Tyler’s wife, he is not too far off. AS

ON RELEASE FROM FRIDAY 2 AUGUST