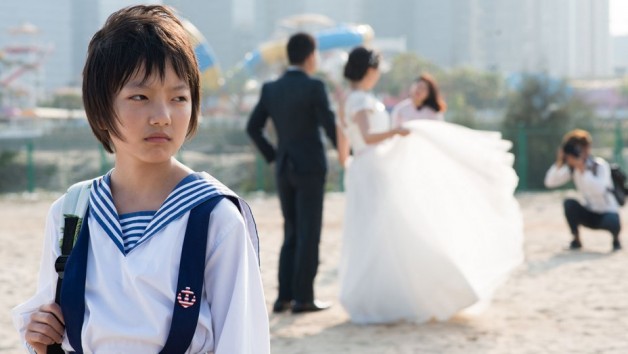 Writer and director Vivian Qu was the producer of Black Coal, Thin Ice and rose to fame with her debut Trap Street. Her second feature is a low-key female-centred affair that deals with the complex web of corruption that emerges after two young girls are assaulted in a seaside town. This is a subtle and luminously delicate drama that leaves the details of the crime offscreen to deal with the psychological effects on the teenagers who are both underage, one of them only 12. Covering similar ground to Black Coal, ANGELS WEAR WHITE offers a bleak but affecting insight into the plight of women generally in modern China, not only from middle-class backgrounds but those who have escaped rural poverty and found themselves at odds with the criminal elements  in more prosperous areas.

Teenager Mia (Wen Qi) is a chambermaid in a resort town on the island province of Hainan. During her night shift on reception she checks in a man and two little girls, Wen (a tiny and delicately vulnerable Zhou Meijun) and Xin (Jiang Xinyue), who are staying in the room next to him. One of the girls has a blonde wig and orders drinks, but what happens next during the night is never revealed on camera, although it turns out later the girls have been abused, and undergo a hospital examination.

Clearly both teens are suffering from the strict ‘Tiger’ parenting and harsh discipline at school but they keep the trauma under wraps until Wen runs away from mother’s home and turns up at her estranged father’s in the middle of the night, sleeping on the beach when she can’t get in. Mia is scared of losing her job, so fails to give any evidence about why her older more sophisticated colleague Lily was bunking off with her boyfriend.

Police Inspector Wang (Li Mengnan) leads a cursory investigation where the girls gloss over the facts frightened to reveal the truth due to the shame they feel and how the consequences of their revelation might be viewed – not only by the authorities but also their own community and society as a whole. Mia is more streetwise, but the other two are really very naive compared to Western teens. A canny female lawyer (Shi Ke) probes further and gets a better grasp of Mia’s impossible plight.

Qu views her characters dispassionately, we cannot help feeling for them and the deplorable lives they lead, especially little Wen, who only looks about 9, but clearly understands more than she reveals in this dainty, pastel-hued portrait captured by Belgian cinematographer Benoit Dervaux. A subtle occasional score adds a haunting atmosphere to this impressive modern noir. MT