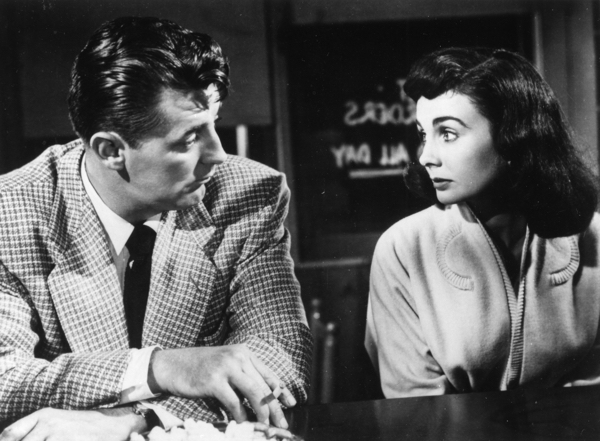 Angel Face was director Otto Preminger’s third foray into Noir territory that had started with The 13th Letter and Laura. The temperamental Austro Hungarian director takes us by surprise with a subtle narrative that explores the Electra complex of its central character Diana Tremayne, whose Electra complex threatening to unhinge her family. This melodramatic cat-and-mouse game film is distinctly European in flavour scripted by Frank Nugent and Oscar Millard and based on a story by Hollywood producer Chester Erskine.

Pictured languidly by Oscar winning Harry Stradling Sr. this lustrous black and white feature is bookended by two car scenes featuring the grandiose family home of the Tremayne family. It all starts when a blaring ambulance arrives at night, with paramedic Frank Jessup (Mitchum) jumping out and running into the villa. The end is rather low-key in comparison: a taxi driver in front of house honking non-stop to no avail in the sunshine.

But to return to the beginning, Jesse sprints to the bedroom of Mrs. Catherine Tremayne (O’Neill), the second wife of author Charles (Marshall). Mrs. Tremayne is claiming to be the victim of gas poisoning, but we somehow do not believe her. Anyhow, Frank repacks the emergency gear, and on his way out stumbles over Diana Tremayne (Simmons), the twenty-year old daughter of Charles, who is sobbing hysterically. Frank slaps her, but she slaps him back forcefully, which somehow impresses him. Anyhow, Mitchum’s Frank is quite the womaniser, and with his girlfriend Mary Wilton (Freeman) keen on another ambulance driver Bill (Tobey), he is intrigued by Diana who very much seeks the protection of older men, and Frank fits the bill as her new love interest, soon moving into an outhouse of the Tremayne residence to take over chauffeuring duties. He’s certainly very assured behind the wheel, having been a racing driver before the War and hopes that Catherine will support his business plans with a loan, while teaching Diana how to handle his gears, although an unfortunate incident results in the demise of her hated stepmother. This tragedy calls for the services of the family’s lawyer Arthur Vance (Greenleaf) and Diana gets her moment in court.

There are elements of The Postman always rings Twice, as well as Out of the Past – with Simmons taking over Jane Greer’s role as Kathie, and Mitchum reprising his sinister turn perfected in the Tourneur outing – he will dust it down again for Charles Laughton in The Night of the Hunter (1955). But unlike the scheming Kathie, Diana is more victim than perp: she feels rightly cheated that her father married immediately after the death of her biological mother in the London Blitz. And his punishment – never to write a single word after his second marriage – is appropriate. Diana wants to get rid of Catherine so her father write again. Frank serves the narrative not as her sexual partner but, to assist her in ‘unlocking’ her father’s creativity, so she can be his exclusive muse.

Ironic then that Simmons and Mitchum have a palpable onscreen chemistry, both of them underplaying their characters, and Mitchum hardly moving a facial muscle, even when they kiss. Marshall is his true dependable self, spoiling his daughter (naively?) with the money of his wealthy wife. DoP Harry Stradling, who won two Oscars for The Picture of Dorian Gray and My Fair Lady uses the camera for long tracking shots, in cloudy images that echo Ophuls’ regular DoP Christian Matras.

Laura will always be Preminger’s most famous Noir but Angel Face is inmany ways more delicate and unhurried. AS