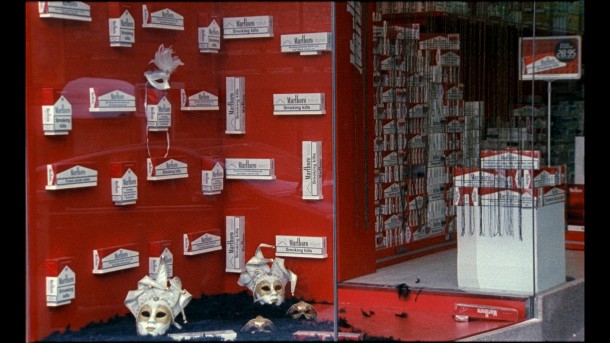 It sounds counterintuitive for a critic to claim a film is better seen than described, but it’s to ANDORRE’s credit that there really is very little to say about it. Filmed in the mountainous country of Andorra—which is situated between France and Spain—Vernier’s short depicts a self-enclosed consumer’s paradise: tobacco, alcohol, sports equipment, chocolate, sweets, toy guns, jewellery and so on. Not only that, but brand names ahoy: Marlborough, Lambert & Butler, Toblerone, Haribo, and more. Shelves and shelves of endless joy!

Beyond this, Andorra is also a ski resort surrounded by hotels, casinos, fitness centres and, in the middle, an ultra-modern glass pyramid that towers over everything like some historical anomaly. There’s even a graveyard. Indeed, Vernier evidently sees in this locale a number of contradictions: situated at some idyllic remove on the one hand, the whole place seems to reek of exclusivity on the other, its literal elevation also connoting a social snootiness. One young resident says, “To grow up here is so comfortable… there are no criminals, no homeless.” But then, a confession: “There is no future here.” She yearns to escape.

Beautifully filmed, ANDORRE unfolds at once like science fiction neo-noir and a Cold War period piece. The place therein appears to be the nightmarish result of a terrible architectural idea actually brought to fruition – and so cut off from the rest of us that the extent to which it has dated hasn’t quite dawned on anyone. But for Morgane Choizenoux’s cinematography credit, it could even be a found-footage film, repurposing propaganda shot by the local tourist board to a more sinister effect. To this end, Julien Sicart’s gorgeous, haunting sound design is in many ways the principal character here. Michael Pattison

REVIEWED AT INDIELISBOA 24 APRIL UNTIL 4 MAY 2014, LISBON, PORTUGAL.