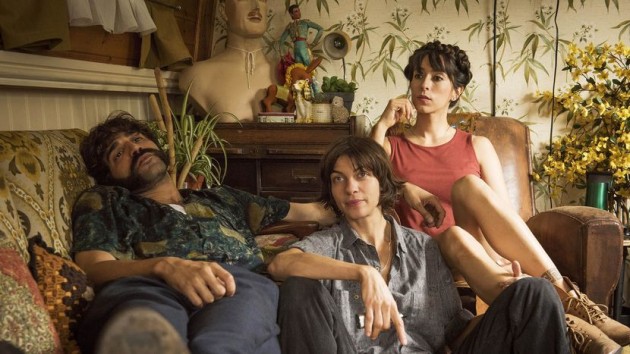 Re-uniting his leads Natalia Tena and David Verdaguer from 10000 KM, director/co-writer Carlos-Marques Marcet offers a modern love story with a twist, set around a houseboat in North London’s canals. Screening during this year’s London Spanish Film Festival this far from  soppy romcom is a barbed tale that proves all is fair in love, for its Eva (O. Chaplin), a 38 year old Salsa teacher who lives with Kat (Tena) on the cramped houseboat, and Roger (Verdaguer), Kat’s boisterous friend and dreadful womaniser, who soon joins the party. Eva uses the death of their cat to fulfil her longing for a child, and with the help of artificial insemination with Roger’s sperm her dream soon comes true. Then Eva’s mum Germaine (G. Chaplin) comes on board and lectures them about the responsibilities of parenthood, since neither of them has a permanent job. But the main problem is that Kat, and to a lesser degree David, want to stay free and unfettered teenagers for life. When Eva loses her baby, she accuses Kat of never wanting to be mother and leaves to stay with Germaine in Barcelona. But her  mother is not very welcoming, and soon we see Eva circling Kat and David on the houseboat like a hungry tiger in this intricate psychology drama. Eva and Kat are the sexual partners; but Kat and David are the spiritual couple, wanting to freewheel forever. While Kat is even more determined to keep the status quo, David, a much softer character behind his macho mask, comes to terms with some aspects of fatherhood. And it is exactly this realisation which drives Eva to despair: sexual orientation is secondary, when it comes to personal commitment and parenthood. Some cuts could benefit this overlong saga but overall Anchor and Hope is a well balanced story that questions how many, often colliding, relationships needs can be fulfilled. The three leads are brilliant, and DoP Dagmar Weaver-Madsen, another team member from 10000 KM, makes great use of the London settings. AS