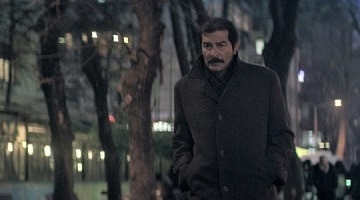 The sombre city of Ankara is the setting for this melancholic portrait of a middle-aged man, still struggling with himself and his past. In his first feature Emre Kayis pulls off a wistful character study steeped in irony and crowned by a charismatic Ugur Polat, that may bring to mind Musil’s Man Without Attributes,

Of course we never see the leopard that sets the cat among the pigeons when it disappears from the zoo while the manager Fikret (Polat) is fighting a losing battle to preserve the national treasure from privatisation. The city Mayor (Alkas) is negotiating with an Arab consortium hellbent on replacing the animals’ home with an amusement park full of thrilling rides, and just a few plastic animals – already in place in the entrance – as a solemn valedictory. The only obstacle is the titular Anatolian leopard, an endangered species, and unless a new home can be found the Arabs will pull out of the deal.

Of course other zoos are keen to take the leopard, but Fikret keeps this quietly under his belt. In an amusing montage we see him trudging from the muddy carpark to a side entrance, a reserved parking space now occupied by a fleet of flash cars belonging to the minister and his staff. His assistant Gamze (Türktan) arrives on the bus, starring enviously at some flight attendants boarding a coach on their way to the airport. Gamze and Fikret will play a secret game, unknown to each other, after the leopard’s fate is revealed.

Suspect number one in the case of the missing leopard is his faithful warden Ibrahim (Ozdemir), who is vehemently against being relegated to look after the hippos. But then the police chief (Gökasan) is shot dead in the countryside where the leopard is supposedly lurking. At a fateful high-school reunion, Fikret’s old bête noire Tezer (Aslan) falls for Gamze. And while the prosecutor tells Fikret that his confession is now redundant, the zoo manager must act to change the course of his moribund life.

This is a feature of nuances: the subtle slings and arrows Fikret and Gamze endure in their loneliness slowly accumulate forcing them to make some radical decisions. It gradually emerges that Fikret’s state of misery is a kind of happiness. And it will need a big step forward to make him climb the mountain ahead of him.

DoP Nick Cooke’s strengths are the sophisticated interiors, and the panoramic widescreen shots of Turkey’s sprawling capital city. Ugur Polat is very much at home as the man observing the unfolding drama with a wry sense of ‘deja vu’ while Tansu Bicer’s prosecutor tells him absurd allegorical stories, toying with his victim Fikret. AS