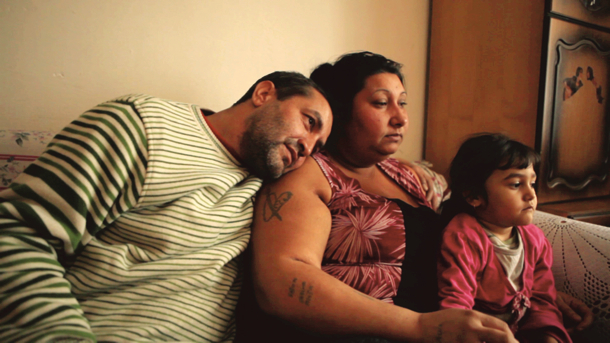 A piece of social realism that offers slim pickings in the way of entertainment or standout performances, despite the non-pro lead winning Best Actor in Berlin. That said, this is a genuine and passionate story that raises the plight of Roma gypsies in Europe today.  Traditionally they have wandered all over Eastern Europe pursuing their own moral and social code, living in enclaves without engagement with the mainstream.

Tanovic takes a poor couple who live with their two little girls a Roma gypsy camp in Bosnia Herzegovina. Nazif Mujic is an ironpicker, or scrap metal man, to you and me. He scavanges for metal and gets ready cash in return from a local dealer while his wife (on and off screen) Senada runs the home.  One day she feels unwell and has a miscarriage,  without medical insurance so are left to illegally ‘borrow’ a cousin’s medical card and receive treatment just in the nick of time.

Denis Tanovic’s trick of using non-professional actors lends authenticity to this simple story with its largely improvised dialogue. Senada Mujic appears totally at ease and philosophical about her plight showing not a shred of fear of worry and trusting in her husband to provide for her and the kids. There’s something to be said for the closeness of their community and the genuine love and respect they demonstrate in the community: borrowing, bartering and lending rather than engaging in consumerism.  They have nothing to envy or covet and seem genuinely content in their lives drawing, comfort from each other in their close-knit families.

Denis Tanovic makes a strong evolutionary point: the Roma have inadvertantly discovered sustainability by running their own show in a political regime where many feel marginalised, uncared-for and ultimately disenfranchised in the organised mainstream. On the other hand, they needed access to emergency medical care through the state system and couldn’t provide it within their own resources. A simple tale offers stimulating food for thought. A much better film and more appealing view of the Roma is to be had in The Forest is Like the Mountains (2014). MT