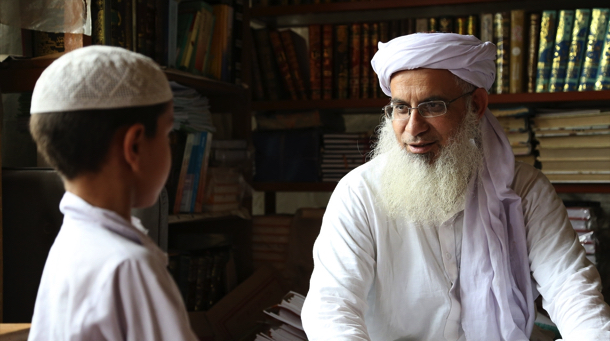 Indian documentarist Hemal Trivedi joined Canadian born filmmaker Mohammed Ali Naqvi for an insight study of Jihadi incubator cells as a reaction to the death of her friend in the Mumbai terror attack of 2008. The result is a chilling portrait of the Red Mosque cleric Abdul Aziz Ghazi who has declared war on the rest of Pakistan and is fighting to impose the Sharia law on the whole, secular state.

In Pakistan there are over a thousand Madrassas (seminars) led by the Red Mosque cleric Abdul Aziz in Islamabad, whose benevolent appearance during the documentary cannot mask his true focus: to overthrow the secular government of Pakistan with force. He is permanently surrounded by machine gun-carrying goons, their number in double figures. He wants to impose Sharia Law all over the country, and where better to start than with the young. ‘Students’ at the Madrassas range from four to sixteen. During this time they start to memorise the Koran on a daily basis from dawn to nine pm. Obviously, the younger ones cannot understand anything of what they are repeating endlessly, whilst shaking violently. The number of Aziz’s followers is put at 40 000, and it is difficult to understand how such a small minority can terrorise a country of nearly 200 million; but they do. Book and DVD burning is one of their weapons in their fight against Music, TV and sport. But Trivedi and Naqvi also show the longing of the young students at the Madrassas, to leave the strictly guarded institution and join their peers outside, who are watching cricket, the national sport of Pakistan, on TV.

The aim of Aziz and his followers is clear: to breed a new generation of Taliban fighters, akin to those who committed the Peshawar attack in 2007, where 132 were killed. Since then, the Taliban have destroyed 1200 state schools and over 50 000 people have been killed in Pakistan alone. After the Peshawar massacre, the military government of Pervez Musharraf put Aziz behind bars for 2 years, when he tried to leave the Red Mosque in Islamabad, surrounded by government troops, in a Burqua. And since January 2015, Aziz is under house arrest, after 145 students and teachers of state schools were killed in December 2014 alone.

AMONG THE BELIEVERS is told through the story of two young students Talha and Zarina. The latter one escaped the Madrassas by climbing over the wall to be re-united with her family in a village where the chief Tariq, has set up a school. Zarina is keen to re-join this school but it is closed down after attacks of the Taliban,  Zarina, hardly fifteen, is married off by her impoverished parents. Talha, even younger than Zarina, has been put into the Madrassas by his parents for the same reasons: poverty is driving the parents of many children to offload them into the hands of the clerics. But Talha, unlike Zarina, loves the life in the Institute simply because he is fed regularly. His parents – the children are allowed one visit home per year – can see how much their son has changed, but it is too late: he is willing to become a martyr for the course. Nuclear physicist Perez Hoodbhoy seems to be the only person, brave enough to oppose Aziz on TV. The absence of any government figure in this documentary is proof of the successful terror of the Taliban.

DOPs Habib Ur Rehman and Haider Ali are literally in the faces of the participants. Close-ups, particularly of Aziz, dominate together with panoramic views of the poverty stricken countryside. The images of the book/DVD burning are very frightening, a reminder what may happen, if Aziz and his followers get their wish of “having Sharia laws all over the world”. Among the Believers is intense and very frightening indeed. AS