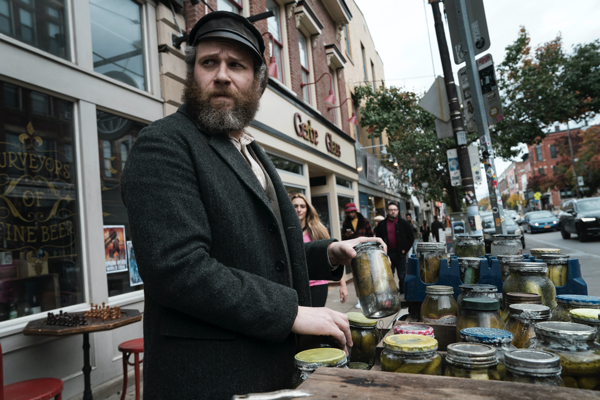 Seth Rogen gives not one but two clever performances – as a Brooklyn techie and his Eastern European immigrant great-grandfather – in this upbeat and intelligent cultural satire bringing to mind Fiddler on the Roof.

An American Pickle underlines just how far we’ve come in the political correctness stakes. Notions of family rivalry and what it takes to succeed in in life are served as a refreshing cocktail of black humour, the weight behind the storyline offering home truths and caustic observations and making this comedy worthy of serious consideration, although Simon Rich’s script based on his novella Sell Out slightly loses its sting in the final stages.

In the Hollywood style opening scenes Seth Rogen plays a fiery but likeable downtrodden Polish peasant Herschel Greenbaum who accidentally falls into a vat of pickling brine in the Jewish community of Schlupsk during the Cossack invasion of 1919. Re-surfacing perfectly preserved in present-day New York (please suspend your disbelief) he meets his tech-designer ancestor Ben, a subdued singleton who has spent his last five years develop0ing an app, and is now looking for investors.

Director Brandon Trost has worked with Rogen before in comedies such as This is the End, The Night Before, The Interview. This latest is fraught with Jewish jokes and immigrant references but the strong theme of hard work and perseverance against the odds rings true more than ever before and resonates with the tough times we’re all going through.

Herschel Greenbaum fetches up in Brooklyn ‘penniless’ and moves in with great grand-son Ben, determined to pay his way by inventing home-cured pickles using rainwater, recycled jars and gherkins thrown out by neighbouring restaurants. This ‘natural’ product this goes down a treat with the ‘woke’ locals (Eliot Glazer and Kalen Allen), and soon he’s making a few dollars.

Determination and self-belief keep him going and spur him on to buy the local Jewish cemetery where his wife Sarah (Snook) is buried, and where construction workers put up a billboard for Russian vodka. The thought of ‘Cossacks’ invading once again is the motivating force for his beef. When the workers refuse to remove the sign, a punch-up ensues and he and Ben find themselves in prison custody, scuppering Ben’s chances of securing finance from ethically conscientious investors. Furious, Ben hits back at Herschel and secretly shops him to the ‘health and safety’ authorities, Herschel losing his pickle livelihood on the grounds of consumer safety.

There is much to enjoy in the tussle between Herschel’s old-fashioned hard-grafting verve and his more passive aggressive modern relative Ben and the family rift drives this feel good comedy forward showing that in the end blood is always thicker than brine. MT