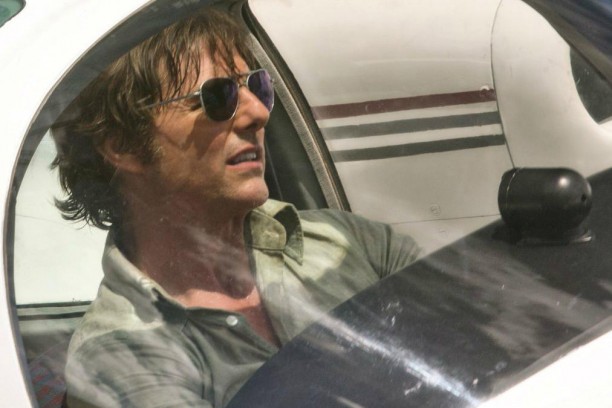 Doug Liman’s (Bourne Identity, The Wall) biopic of Barry Seal (1939-1986) could easily be mistaken for a Tom Cruise vehicle, in which the recently much maligned star plays a drug smuggler and money launderer for the CIA, putting on his megawatt smile and cheesy charm way through two hours of ludicrous mayhem. On the other hand, this feels like yet another Hollywood rewrite of American history.

We are introduced to a Barry Seal, who is naïve, but just a bit too greedy for his own good, when he starts to work for the CIA in the late ’70s, helping various suspicious South American groups to lay their hands on weapons and drugs – both seemingly necessary to fight communism in the sub-continent. Led by agent Mont Schafer (Gleeson), Seal, who once was the youngest pilot working for TWA, soon meets the Medellin Cartel and its main protagonist Pablo Escobar: After nearly coming to blows both sides see the advantages here and Tom – sorry – Barry is soon developing a lucrative side-line in drug-tracking – which naturally led to arms-dealing – for the Colombians, allowing him to trouser some pocket-bulging benefits. But soon everything goes bad: Barry is sucked into the Iran-Contra affair, with leading man Oliver North and a stonewalling White House led by Ronald and Nancy (‘Say No’) Reagan. Seal gets away from an Arkansas court, even though his guilt is proven, and gets a 1000 hour community work sentence. But the past catches up with him in a parking lot of the Salvation Army in his hometown of Baton Rogue, Louisiana in 1986.

Shot by DoP Cesar Charlone (Blindness) with competence but no imagination in the manner of all major Hollywood features, we are treated to two hours of escapism: just the right sort of juvenile nonsense without any impact, that might lead us to forget where we parked the car.

Not much to write home about – but looking into the CV of the real Barry Seal the picture changes dramatically. Born in Baton Rogue to a father who was an active Klansman, young Barry was in love with flying, and joined the Civil Air Patrol. In 1956/7 he met a certain Harvey Lee Oswald, and three years later became a member of “Operation 40”, a group of Cuban exiles, who where sponsored by the CIA and had been founded by then vice-president Richard Nixon. The group not only participated in the Bay of Pigs invasion, but staged assassinations in the USA and plots in many South American countries well into the 80ies, when American Made starts. And a sworn statement of his wife Deborah states “that Barry flew a get-away plane after the assassination of John F. Kennedy out of Dallas”, in which Cuban exiles played a significant role. An American made hero, indeed – but not the funny guy we are led to believe. AS