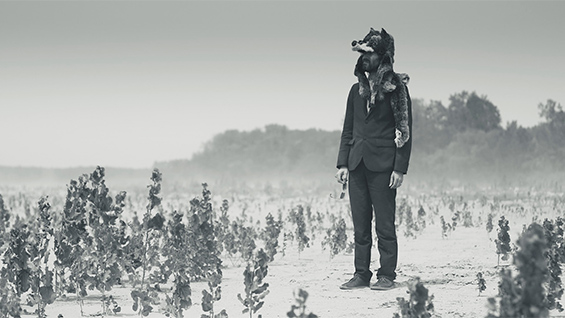 Former SUPER FURRY ANIMALS frontman Gruff Rhys is on a mission to push the boundaries beyond music and into the realms of multimedia with this project entitled AMERICAN INTERIOR that unites literature, film and technology to create a trailblazing multi-sensory experience.  And he succeeds with this magnificently quirky magical mystery tour that fetches up in the lunar landscape of North Dakota, were he meets the Native American Mandan Tribe and bonds with them over their struggle to keep their native language alive (as he does with the Gaelic tongue) in a fascinating road trip of discovery in more ways than one.

Obviously a man called Rhys is bound to have Welsh forebears and here he traces his ancestry back to a modest farmhand called John Evans who tried to establish the veracity of an 18th Century Native American Tribe called “Madogwys”.  Evans lost his parents at a young age and, according to a Welsh psychiatrist, this was the reason for his intrepid mission into what was then considered a trip to the Moon.  Rhys makes this film all the more fun and at times poignantly moving, by taking with him a miniature model of Evans complete with soulful eyes, an incipient beard and clothes reconstructed from records of the time (remember the effect of Wilson in Cast Away?). With his tongue firmly in his cheek and a catchy selection of ballads, he then sets forth with his ‘mate’ to trace the adventurous exploits of the real Mr Evans, that involved wrestling various furry and unfurry animals amongst other feats of derring-do and establishing a real map of the Mississippi.

Taking place during the summer of 2012, the documentary is inventively filmed by Ryan Owen Eddleston and features monochrome camerawork with salient objects highlighted in fluorescent colours sometimes to comic effect. The result is  inventive, fun and filmic as he takes us through the real-life paces of Mr Evans in this foreign land. Thoroughly enjoyable even if you’ve never heard of the ‘Furry Animals’: Gruff Rhys is a chatty, offbeat character who oozes silliness and seriousness in equal measure (whether this is crafty or unwitting it certainly makes him engaging company on this documentary road-trip not to be missed.MT