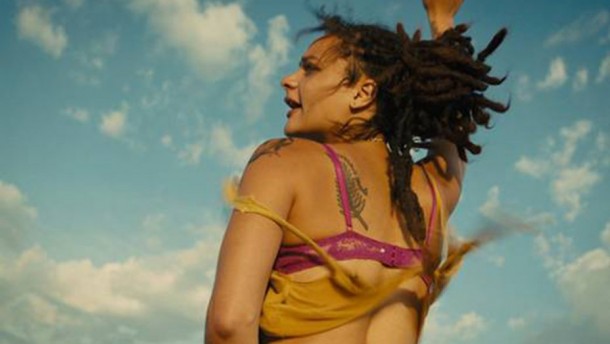 Andrea Arnold’s US debut is a runaway road movie that follows fiesty newcomer Sasha Lane across America’s Midwest with a crowd of defiant drifters trying to sell something that nobody really wants on a journey that never comes to much but rambles enjoyably on its way. Drawing parallels with Gus Van Sant’s Paranoid Park there are also echoes here of Larry Clark’s loose brand of sexuality in the partying and free-wheeling fun that goes on as the band bond with Shia LaBeouf adding his own brand of charisma. Although there are some magical moments with Jake (Shia LaBeouf), adding his own brand of charisma to the road show as head of sales in a drama that drifts along dreamily often in a drunken haze.

This is fun for the first hour but only two other characters stand out: surfer dude Corey (McCaul Lombardi), and ditzy Pagan (Arielle Holmes in a similar role to her character in Heaven Knows What). The tone is upbeat and rebellious in this melange of meandering and amorphously linked encounters, but for its scant three hour running time it lacks dramatic torque for the most part working best as a euphoric mood piece where the romance between Star and LeBoeuf is the slow peddling driving force.

The visuals are vibrant and sensual whether on the widescreen or in the more intimate spaces of the van and motel rooms and Arnold never judges her characters letting them glide on in the glory and occasionally more soberly in this (for them) memorable story with its eclectic musical moments from Bruce Springsteen’s ‘Dream Baby Dream’, and Bonnie ‘Prince’ Billy’s “Careless Love,”. MT