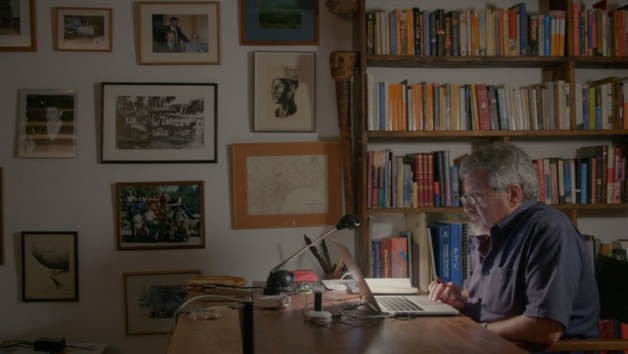 Providing compelling viewing filmmaker Charlie Siskel (Finding Vivian Mayer) interviews William Powell, the author of the infamous ‘The Anarchist’s Cookbook’ (still available on Amazon) in his home in Massat (France) shortly before his death in July 2016. Siskel relentless probing style and cross examination often has the effect of makimg the audence sympathise with Powell who gradually emerges as a man who has suffered emotionally during his peripatetic childhood – he was only 19 years old in 1970, when he wrote the provocative manual that lists amateur bomb-making methods during a time where the US was experiencing a period of cultural and societal shifting, similar to that seen in France with the student riots.

Powell was the eldest son of the spokesman for the UN General Secretary, and he went to be schooled privately in a UK boarding school were he felt as alienated for his ‘English upperclass accent’ as he did later on his return to New York State where was expelled from ‘a school for delinquent children of the rich’. He confesses to feel most at home in countries where he is an outsider, explaining his reason for settling in a remote part of rural France.

The near civil war atmosphere in the USA druing the Vietnam War at the end of the 1960s, made many outsiders like Powell feel that the time for revolution had come. After all, Lincoln himself had written about the right of the population to raise up against the government. The Anarchist’s Cookbook sold about 2 million copies – not bad for a book mainly copied from US Army handbooks, and found in public libraries. Powell himself sold the rights to his publisher Lyle Stuart for 10000$, and got royalties of around 5000$. Unfortunately for the Powell, 65 at the time of the film, when ‘interrogated’ by Siskel it also emerges that his book was found in the possession of the perpetrators of the Columbine School shooting, and the Oklahoma City tragedy amongst many others.  “Would you villify the makers of guns?” points out Powell, who maintains his innocence although confesses to feeling a certain amount of regret, if not remorse.

Nevertheless, Powell comes over as haunted man: his whole career in schooling pupils with special needs in Asia and Africa, was blighted by the “Cookbook”: he lost countless positions and always lived in fear that his youthful tract would catch up with him. What is surprising, is the fact, that neither Powell nor SIskel discuss the role of the USA gun lobby and State Weapon laws in the terror acts of the past. After all, the Columbine killers bought their weapons on the net! Who needs “The Cookbook” when they can buy weapons like sweets.

It is the US-gun culture, who is far more responsible for the violence in the streets than any books – and it is defended by politicians of both major parties. As long as no changes in the law are enforced, the status quo is an invitation to run amok – never mind the political/religious affiliation of the disturbed psychopath.

William Powell died suddenly this summer after one year into shooting of the documentary. He atoned all his life for his youthful provocation, helping young students to channel their alienation and aggression into something constructive. As for Siskel: we should thank him for his efforts as a filmmaker, which are invaluable. But one would except a little bit more humility from a man who was involved in controversy himself as a filmmaker of Finding Vivian Mayer and co-producer of Michal Moore’s Bowling for Columbine. Nobody should throw stones – never mind the glass house. AS