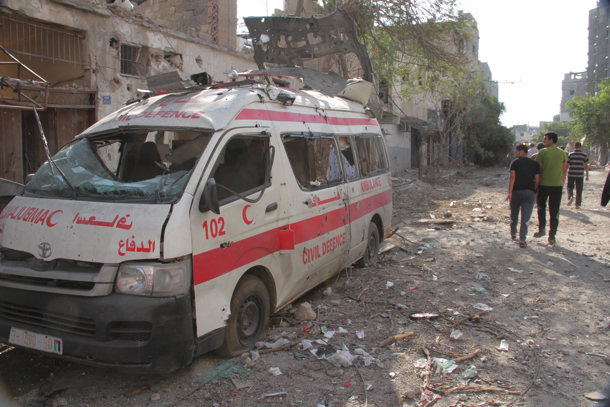 In the summer of 2014, Israeli forces bombarded Gaza for 51 days, after Hamas attacked Israeli Special Forces. 18,000 houses were destroyed, half a million people had to leave their homes. After his neighbour’s house was destroyed on the first day of the war, 23 year-old Mohamed Jabaly took his camera and filmed an ambulance crew for the most of the war; his main reason was “to escape his own fear, clinging to the camera make me feel safe”. The result is an honest reportage, where we always hear Jabaly’s comments, without ever seeing him.

Surprisingly, there is a nearly total absence of politics – neither the director, nor the citizens of Gaza even mention Israel. Most comments of the victims praise their resilience, for which they thank God. And they need it – the camera showing the chaos of the fleeing masses. Strangely, the Israelis often give warning of around a minute, which block of flats they are going to attack. Sometimes the information is true, helping the targeted populace to flee in time – some times the phone calls are pure hoax. There are very strange moments, like the male nurse in the hospital proudly wearing proudly a Frank Lampard Chelsea shirt, and a man complaining to Jabaly, “the bomb destroyed my washing machine, which I did not even pay for.”

Finally, the director gets caught an apartment block, where he has followed the ambulance crew, and the rubble comes down on him. “I only wanted to run, for my life”. There are hardly any gory scenes, Jabaly does not hover over the casualties; a bone fragment on ground makes an impact, but at the same time, Ambulance shows the doctors in the hospital, trying to get the crowds away from the hospital entrance because they are blocking the way of the ambulance. Jabaly’s comments are confirming his approach to show as much as possible: but his fear grows, and he has to take a break form shooting; his family more or less locking him in. But five days later, he is back with the ambulance crew: the driver Abu Zouq, a calm and competent leader of his men. Jabaly shows the rubble, through which the people are fleeing back into their bombed houses, just to fetch a mattress so as not to have to sleep on the bare ground. Suddenly, the ambulance becomes a taxi service when the crew drives women and children from an area under bombardment to a safer zone in the city. After an excursion to a boarder crossing with Egypt, where families are separated because they do not share the same nationality, Ambulance ends on a hopeful note: children playing at Eid, just before a ceasefire ends this war – one of many since 1947 when the British government partitioned their Protectorate Palestine. Ambulance is passionate: it not only shows the suffering, but also the happiness of the survivors at being alive. Jabaly’s portrait of Gaza echoes Humphrey Jennings documentaries about London during the Blitz – a well deserved compliment indeed. AS