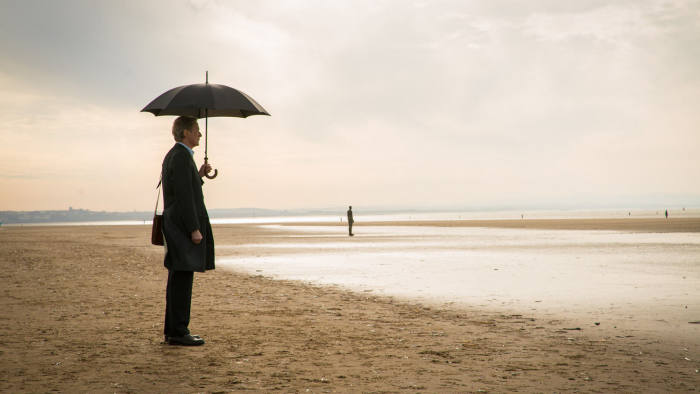 Bill Nighy, Sam Riley and Jenny Agutter star in this stylishly amusing comedy-drama that explores love, loss and communication – or the lack of it – for one English family. The title refers to the tailors’ code to buttoning a suit jacket.

Nighy is terrific as Alan, a retired but sharply suited Merseyside tailor who still enjoys a game of scrabble and his nighttime strolls, always hoping to bump into his son who disappeared years ago. Grief has seen Alan retreat into the comfort of lexicography, and this obsession for scrabble enables him to showcase his broad knowledge of words in a killer ability to play a world-class game. Yet beneath Alan’s dapper exterior and  nonchalance lies a deep sadness and disillusionment, and a longing for the son he will never forget, and who left in a huff after a scrabble contretemps erupted over the word “Zo”.

A gentle rain falls as we first meet Alan on the beach in Crosby where he joins his other son Peter (Sam Riley) for one of their regular visits to identify an unclaimed body. Deciding to make a night of it, they head to a nearby hotel where they come across another scrabble-loving couple in the shape of Agutter and McInnerny in a scene that’s a real pleasure to watch, performed with consummate ease, and yet riven with subtle psychological insight and deadpan humour.

Sam Riley gives a stunning turn as the dejected ‘also ran’ Peter, who lives contentedly with his pleasant wife Sue (a superb Alice Lowe) and their secretive son Jack (Louis Healy). But it’s Alan’s dedication to scrabble that forms the nub of the narrative and the dramatic touchstone that drives the plot forward. Staying at Peter’s house after the morgue visit Alan gets the chance to share some local family history: “your aunt was a part-time, freelance coal miner”, he also comes across an online Scrabble opponent who appears to fit the profile of his missing son, sending Alan into a fierce all-nighter trying to track down the mystery internet player.

Scrabble is the cement that holds this family together in this poignant but enjoyably petillant paean to communication. Frank Cottrell-Boyce’s intelligent script is fraught with witty and wise dialogue and is stylishly directed by cinematographer Carl Hunter who brings artistic flair to the idiosyncratic domestic interiors and the widescreen images that reflect the loveliness of the luminous Lancashire landscapes. MT