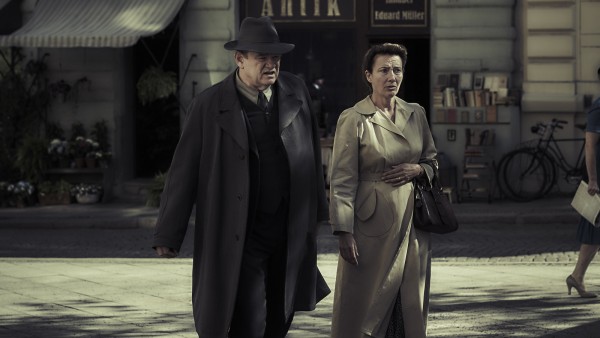 Vincent Perez’ 2016 film version of ALONE IN BERLIN, based on the novel Everyone Dies Alone (Jeder stirbt für sich Allein) by the German author Hans Fallada (1893-1947), is the forth film/TV version of a book that was dashed down in just 24 days in 1946 by an man who was confined to a Berlin psychiatric ward in Berlin and would die of his life-long drug and alcohol dependency months before the publication of his last work.

Falk Harnack was the first to turn his hand to a German TV version of the novel in 1962. Harnack had all the credentials to handle the story’s resistance motif: he was part of the German underground movement; his brother Arvid (together with his US-born wife Mildred Harnack) had been executed by the Nazis in Berlin-Plötzensee in February 1943. Told without frills, this version is certainly the one closest to the page. Eight years later, Hans-Joachim Kasprzik followed with a mini-series of the novel and would go on director would go on to make two more Fallada adaptions: Wolf Among Wolves and Little Man, what Now?

Whilst all three Fallada films captured the zeitgeist with an unsentimental approach, they lacked the aesthetic poverty of many German TV productions of that time. His originality would cost Kasprzik dearly, in 1966 his satirical comedy Hands Up or I’ll Shoot was one of around ten films produced in in the mid-60s Germany and formed part of the ’Verbotsfilme’ (Banned films), only to be shown after 1989 – or in the case of Kasprzik’s Hands Up only in 2009, 12 years after his death. 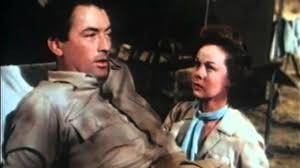 It is only memorable for the two leads: Hildegard Knef; who had a short post-war career in the UK and the USA with The Man Between and The Snows of Kilimanjaro. alongside Gregory Peck.  She also starred in The Sinner, a West German production, where her part-naked breasts caused a public uproar. Opposite her, as Otto Quangel, was the German actor Carl Raddatz, who had been a staunch Nazi, and starred in propaganda films like Stukas, Heimkehr and Veit Harlan’s Opfergang. He was certainly a provocative casting choice as a resistance fighter. When the film was premiered in January 1976 in West Berlin, some demonstrators protested outside the cinema ‘Filmbühne Wien’ on the Kurfüstendamm against Raddatz. Somehow, the topic of the novelist Fallada and his relationship to the Nazis had come full circle.

Born as Rudolf Dietzen to upper-middle class parents, in his early teenage years Fallada was run over by a horse and cart  and never really recovered a long dependency on painkillers and morphine. At sixteen, he decided with his friend, Friedrich von Neckar, to commit a double suicide, camouflaged as a duel. Whilst his friend misfired, Fallada killed him, and afterwards shot himself in the chest. He survived, but left school without A-levels. 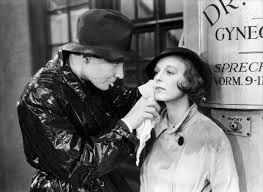 After his first novel was published in 1920, he worked as a farmhand, ending up in prison for petty crime, an episode reflected in his novel Wer einmal aus dem Blechnapf frisst (Who Once Eats out of the Tin Bowl”. He got some emotional stability from his marriage to Anna ‘Suse’ Issel in 1929 and went on to publish his first great success ‘Kleiner Mann, was nun?’ Little Man, What Now (left) which was filmed two years later in Hollywood 1935, directed by Frank Borzage for Universal.  Laemmle’s Jewishness made Fallada “an undesirable author with the Nazis; he was arrested and lived on his farm in Carwitz, writing children books and other un-political material. In 1937 he returned to serious writing with Wolf unter Wölfen (Wolf amongst Wolves), which the Nazis saw as a critique of the Weimarer Republic – Goebbels was so impressed, that he asked Fallada to write an anti-Semitic novel. In 1938, Fallada’s English publisher had arranged for him and his family to emigrate to the UK, but Fallada decided at the last minute to stay in Germany. He soon found himself in an asylum, after having fired a pistol at his wife, even though the couple had reconciled.

During 1944, Fallada pretended to write the anti-Semitic novel for Goebbels in a psychiatric ward – but instead authored his most personal novel Der Trinker (The Drinker) in code. It was was only published in 1950, after a long de-coding process. He also wrote a war-time diary, sharply critical of the Nazis, which would have cost him his life, he it been discovered. After the end of the war, Fallada met the writer (and future GDR minister for Culture) Johannes R. Becher, who gave him the Gestapo file of Otto and Elise Hampel, on which Fallada based his Everyone Dies Alone. After divorcing his first wife, he married another much young morphine addict, Ulla Losch, dying in East Berlin, which would soon become the capital of the GDR and cementing his status of a man of great political ambivalence. AS