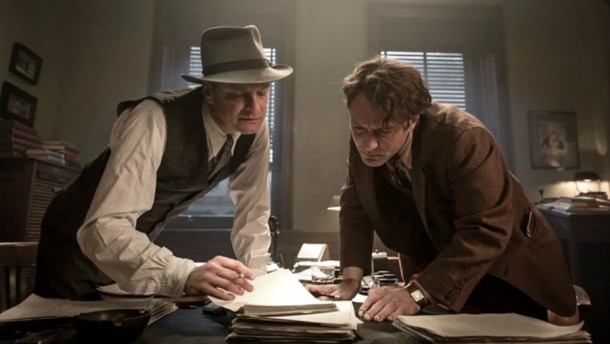 Brendan Gleeson and Emma Thompson make this rather plodding wartime drama watchable. They play the unhappy married couple at the centre of a piece of German wartime subversion in a flawed adaptation of Hans Fallada’s postwar novel set in Berlin.

This is Vincent Perez’ third film as a director. His ambitious but cinematically lacklustre piece explores how the tragic death of a child can turn an ordinary couple against the state with a petty crime involving the publication of anti-government slogans, printed on postcards and randomly left in public places. “Hitler’s war is the worker’s death”. Whereas nowadays this kind of detritus would be swept away into the trash (or recycling), Surprisingly in 1940 Berlin, due to the powerful grip that Nazism exerted on wartime Germany, most of the cards were actually handed into the authorities and the couple are arrested in a narrative that reflects on the moral and political intricacies of the postwar blame game.

Gleeson and Thompson have German accents – as does German born Daniel Brühl, who plays the most complex character in the film as Escherich, an ardent Nazi police inspector whose fierce doggedness is crushed after he falls foul of an SS officer during the investigation. Initially the whole thing feels forced and unconvincing despite the combined talents of Emma Thompson and Brendan Gleeson who do their best to deliver some really clunky lines and manage gradually to thaw their characters’ failing relationship through the conspiratorial brio of their joint endeavour, eventually breathing life into a bland but intriguing wartime drama that shines another spotlight on Nazi Germany. MT