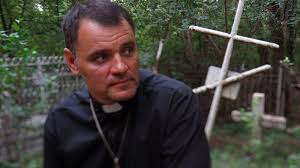 Blood Brother director Steve Hoover creates another tour-de-force aesthetically as well as contents wise with this portrait of the “vigilante priest” Gennadiy Mokhnenko, who singlehanded created a refuge centre for abused children in the Ukrainian port city of Mariupol, liberating the victims by force from abusive parents and exploiting drug dealers,

Gennadiy Mokhnenko likes to be seen as the hard-but-fair, rather naïve do-gooder, who is both priest and strongman: saving the young victims in the Ukranian city of Mariupol and enforcing the law, police and civil authorities seemingly do not want to uphold. This requires certainly an uncompromising attitude in a society, where lawlessness seems not the exception: it is fair to say, that order has broken down in Mariupol. At the beginning, we see Mokhenko cultivating this image in front of a TV, where “Crocodile Gennadiy” a Russian cartoon character from the Soviet era, saves children. Then we are introduced to Mokhnenko’s own Republic “Pilgrim”, an orphanage for the forcefully liberated children: sex-slaves, drug addicts and victims of horrific parental abuse and neglect.

But Mokhnenko’s biography is anything but simple: In 1991 he attended a bible course in Latvia, a year later he founded his own church in Mariupol, and became its pastor. In 1994 he started to study at the Donetsk Institute of Social Education in the Department of History and Religion, graduating in 1999. He followed it with an MA in Theology at Kiev branch of the Westminster Theological Seminar. And when he reads through his Wikipedia page under the heading ‘Criticism’, he smiles warily: one of the few moments when the mask of guilelessness slips. Next we see him munching hotdog, drinking a coffee from plastic cup, declaring “that he likes everything Western”.

But there is an organised purpose behind the façade, his missionary streak is very cultivated, but he reaches out to many: his speech at a women’s prison is a great example of motivational vigour: he coaxes and threatens at the same time, a born orator. It is fair to say, that the long and unhappy relationship between the Ukraine and USSR/Russia, culminating in the war, and the annexation of the Crimea by Putin’s forces, plays a big role in this conflict ridden region: Donetsk, the capital, is occupied by pro-Russian forces of the “Donetsk People’s Republic”, and Mariupol is now the provisional centre of the Donetsk Oblast. In June 2014 the Ukrainian army recaptures Mariupol from the Russian forces after a short invasion, but Russian rocket attacks continued into 2015. For once, Gennadiy, saying goodbye in the last take like a stranded walrus on the beach, is speechless and rather morbid.

Seguing back and forth between archive footage from 2000 to 2008 and the more recent past, Hoover does not spare us horrific images, like the deaf girl, who had been raped for many years, whose baby has been taken away by the authorities, and who lives now, after her liberation by Mokhnenko, in a psychiatric ward, asking to be re-united with her baby. DOP John Pope’s changing widescreen images include pure horror elements, cinema verity realism and dystopian S-F elements. Almost Holy is radical in its approach and innovative in its execution – but it is as bleak as a Hieronymus Bosch painting. AS