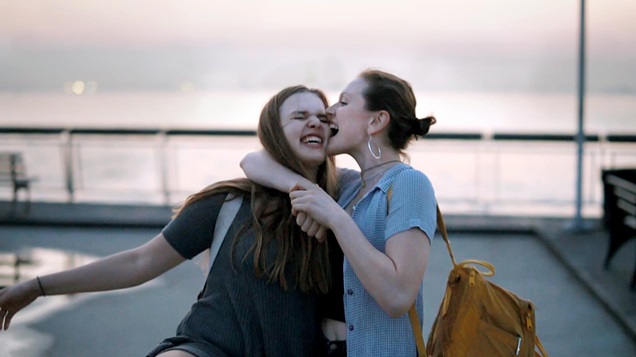 What is it like to be a teenager girl today? The adolescent time in a girl’s life has always been the focus of Jenny Gage’s work as a filmmaker and photographer. With ALL THIS PANIC she offers up a female answer to Richard Linklater’s Boyhood in a fresh and effervescent vérité portrait of Brooklyn’s magical youth from teen to young adulthood. Despite its title, this is an uplifting and positive portrait of puberty – a time that seems much the same today as is did 40 years ago – in far less permissive days.

Gage has known some of their girls in her documentary since they were only little (6-8 in the case of Dusty and Ginger) and growing up in her neighbourhood. The film begins around a decade later and takes place over three years. We first meet the crop-haired and delicately gamine Lena while she’s still at school – by the end she’s in college, with her hair tipped in sky blue. Despite her broken family – who love her to bits – she’s sensible and engagingly courageous about her hopes for the future which include a boyfriend and travel. Her father is mentally unstable and her mother is open with about their limited resources – but this could be the making of Lena, just going to show how parental love and security is far more important for kids than money.

Ginger is unsettled and less sure of her direction. A tiff with Dusty sees them heading out for the city – both wearing headphones in protest, yet travelling together. Having decided not to go to college Ginger debates dreams of becoming an actor with her father – who appears unorthodox, English and covered in tattoos – and is not impressed with Ginger’s lack of effort in this endeavour. Little sister Dusty and her best friend the freckled Delia, listen carefully to the discussion and try to fathom out their less ambitious yearnings that include losing their virginity and having kids.

Sage is an articulate and strong-willed black girl who has recently lost her father. Attending a private school in Manhattan, she has won a coveted scholarship to Howard University. Squabbling with her mother over the household chores, she seems the most driven of the group. Olivia is introspective and softly spoken, with the most beautiful eyes – by the end of the film she is in love with another girl. And lastly, Ivy – the most streetwise – is in a committed relationship but unsure about the future without strong support from her parents.

Delicately captured in Tom Betterton’s limpid visuals this is impressionistic snapshot of blossoming womanhood explores intimate moments as the girls share their expectations of sex, studying and financial independence. Gage presents an encouraging picture of the next female generation, as giggly young things become the next generation of leaders, mothers, wives and partners. MT