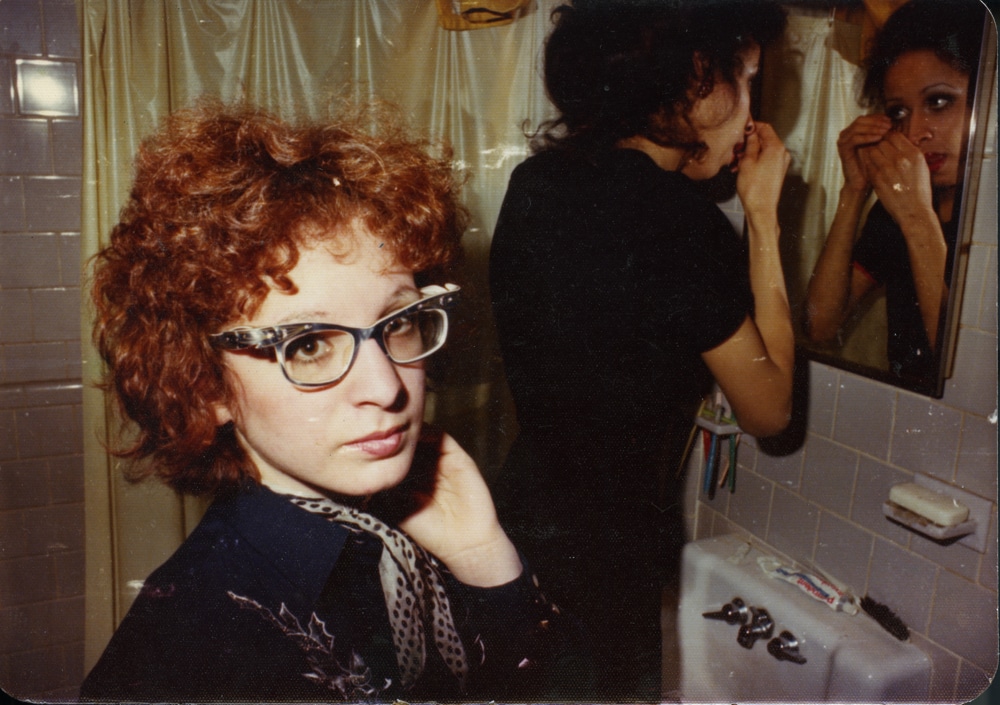 US photographer and activist Nan Goldin (1953-) captures her own life from behind the camera of this documentary directed by Laura Poitras, best known for her 2016 biopic Risk that centred on Julian Assange. The film is in part tribute to Nan’s battle with opiod addiction that came about after a wrist injury. And she holds the wealthy Sackler responsible for bringing about ‘an unfathomable death toll’ with their opiod drugs.

Certainly less idolatrous than Poitras’ look at the Australian Wikileaks editor this novel but flawed ‘interview’ style structure works – up to a point – and went on to win her the Golden Lion at Venice 2022 on account of its timely subject matter, rather than the film itself.

Goldin comes across as straightforward and pragmatic in an outing that often feels like  two films rolled into one, told in seven chronological chapters starting with the Washington born Goldin’s early years in a well-to-do but dysfunctional Boston-based family whose ethos reflected the sexual repression of the Eisenhower era.

It emerges Nan’s older sister Barbara was influenced by the suppressive regime and spent her life in and out of psychiatric hospitals before committing suicide at the age of eighteen and leaving her younger sister traumatised for the rest of her life. The film takes its title from a quote in Barbara’s’ diary. Nan was placed in foster care by the Social Services but ended up being evicted.

New beginnings came with Art-School, and then Nan joined the underground community in New York where films by Bette Gordon and Vivienne Dick bore testament to a wild but creative scene. Velvet Underground, James Brown, Nina Simone and Charles Aznavour were regulars, and Nan was influenced by the work of Cookie Mueller and and David Wojnarowicz, both victims of the Aids Epidemic. A breakthrough came with “The Ballade of Sexual Dependency”, which started life as day-in-the-life slide-show for its subjects. A year later, in 1986, the work appeared as a celebrated photo book showcasing the love life of New York’s Bowery neighbourhood, starting in 1979.

All the Beauty then flips to March 10th 2018 in the then “Sackler Rooms” of the New York’s Metropolitan Museum of Modern Art where Nan and her con-activists demanding an end to the “Temple of Money’ financed by the Sackler family by staging a ‘die-in’ on the flat. Later the same group “PAIN (Prescription Addiction Intervention Now) launches more protests in Museums all over the world, including the Louvre in Paris, which became the first gallery to remove the “Sackler” label from its exhibitions. The “National Portrait Gallery” in London soon followed, rejecting a gift of £100,0000.00 from the Sackler family, after Goldin threatened to take her exhibits out of the show. Today, many large Museums worldwide have taken her cause on board.

Goldin’s lead of the campaign is very personal, like everything about her work. After being trolled by Sackler employees, the family settled with PAIN for a hefty figure of six billion dollars, which later escalated to ten million, in compensation for the victims. Three members of the disgraced family are interrogated by Goldin and her co-activists as part of the settlement. The Zoom meeting shows them rather sheepishly grinning into the camera, words fail them.

Nan Goldin is not only hard on the ‘greedy’ corporates, she also admits to working as a sex worker, and shows videos of the wounds received from a boyfriend. Nan Goldin is still fighting the battle, her sister Barbara lost. AS