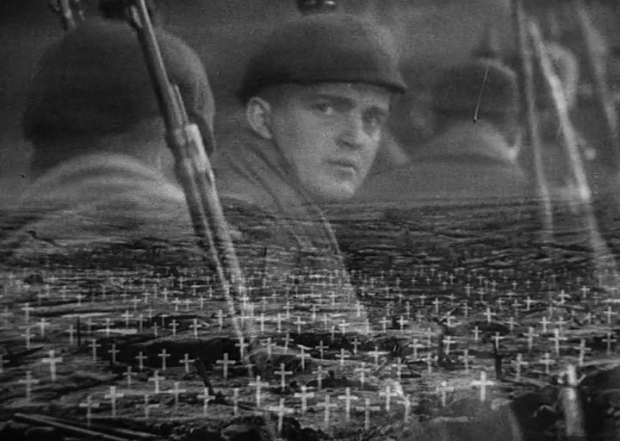 All Quiet on the Western Front (1930) | Bluray release

Lewis Milestone’s 1930 film of Remarque’s novel All Quiet on the Western Front is justly celebrated as one of the finest WW1 films depicting the life of an ordinary German soldier immersed in the horrors of trench warfare. Its graphic power was such that it even shaped the perception of war as experienced by a real soldier in WW2. Raleigh Trevelyan wrote in a published war memoir that to be pinned down on the Anzio beachhead in 1944 was to be in “…a complete All Quiet on the western Front film set once more”

Paul Baumer, an idealistic would be writer, played by Lew Ayres, is one of a group of German students who are persuaded by their hectoring and jingoistic schoolmaster to enlist. They are then ruthlessly drilled by Himmelstop (John Wray) their former local postman, now a sergeant, Yet his cruel treatment is nothing compared to the men’s suffering on the battlefield. Gradually they become disillusioned as the war drags on.

In 1930’s pre-code Hollywood it was remarkable to dramatise the plight of the former enemy. Producer Carl Laemmle, Jnr of Universal Studios, embarked on an ‘unconventional’ subject right at the beginning of the transition from silent to sound film. Like Hitchcock’s Blackmail, All Quiet on the Western Front exists as a late silent and an early talkie. And Universal’s new Blu Ray edition contains both editions for you to judge and compare.

My only qualms over All Quiet on the Western Front concern the acting, mostly centred round moments such as the bunker scene. A constant bombardment disturbs the men’s nerves, but even allowing for the stress of the situation it does produce some forced and hysterical over-acting. However this scene and other staginess (a simplified discussion about dealing with political leaders) is quickly forgotten, for the lead performances of Lew Ayres and Louis Wolheim (as the wised up Katczinsky) are terrific.

Apart from its sincere anti-war sentiment, what most impressed me again was Milestone’s great skill at eloquent staging. The famous opening classroom sequence of the frenzied Professor Kantorek (Arnold Lucy) has him framed against marching troops outside. Another remarkable perspective depicting a line of ambulances, at the bottom of a hill in a French town, were soldiers are being shot and bombed, carefully framed by a wide open window, is superbly realised. And there’s an amazing scene of Paul crouched in a dug out watching, from a long angle viewpoint, as French soldiers leap over him. Here Milestone was deeply indebted to his photographer Arthur Edeson. Their collaboration produced stunning battle scenes were the camera moves with such modern fluidity.

It’s not till 1957 and the release of Kubrick’s Paths of Glory that we have a bleak WW1 terrain filmed with comparable intensity. Both Kubrick and Spielberg (of Saving Private Ryan, 1998) were much indebted to the technical achievements of All Quiet on the Western Front. So if you can tolerate the occasional histrionics of some of the less experienced actors then this great compassionate production is still very affecting. Alan Price