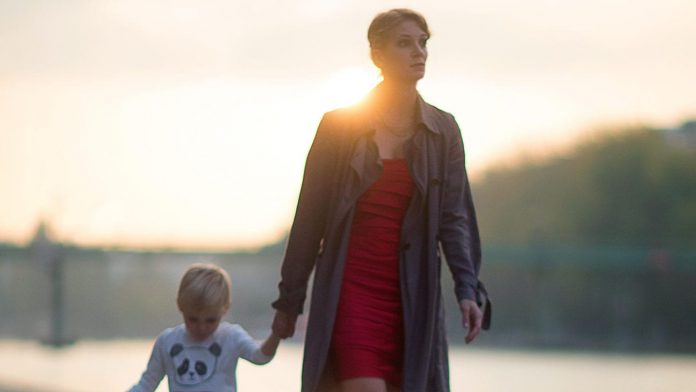 ALICE sees two sex workers frolicking around in Paris and looking very much like Celine and Julie go Boating from Jacques Rivette’s New Wave classic. One says to the other “We are in control, you will see how easy it is”.

So what did Josephine Mackerras have in mind with her story of modern day Parisian sex workers? Alice (Piponnier) and Francois (Swabey) seem to be happy as a couple: we first meet them at a party where Francois quotes large chunks of Racine and kisses his wife passionately. But soon we learn that he has been seeing high class prostitutes and frittered away the money in their joint bank account, and, worst of all, has not paid the mortgage for twelve months: Alice learns that their flat will be re-possessed if she cannot pay the the arrears and worries about her little son’s Jules (Ferrand) future. Then, finding the contact number of an escort agency on Francois’ mobile, she attends an interview session, and gets the job. She meets Lisa, who shows her the ropes, and they become best friends. Clients are as worst odd, but usually very understanding. Then Francois comes up with a sob story about how his father took him to a prostitute age thirteen. He begs for forgiveness, so Alice uses him only as a babysitter. Then the worm turns, and Francois threatens to take Jules away from her mother. Mackerras ends her dubious tale with a kitsch, over-the-top happy end.

DoP Mickhael Delahaie’s idyllic Paris images would look better with a tourist advert – Alice and Lisa wandering around ‘romantic’ Montmartre is one example of the escalating cringe factor. Francois is the only convincing character, the women leads have to deal with simplistic dialogue; and Alice seems pretty clueless as a woman too dumb to check her bank accounts for a whole year. But the main problem with ALICE  is the director’s attempt to romanticise a profession which destroys both body and soul. AS