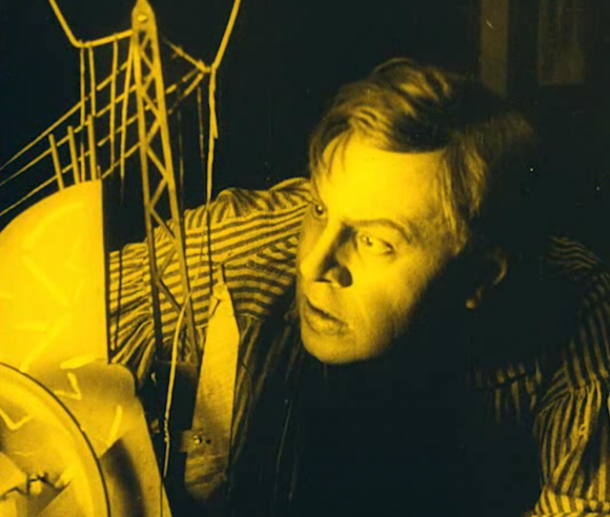 The intriguingly titled ‘Algol’ (1920) crops up occasionally in histories of silent cinema in general and sci-fi cinema in particular, but the excellent restoration – complete with a live musical accompaniment by the esteemed Stephen Horne – displayed at the Barbican, in the City of London, represented the first chance in Britain actually to see the film on a big screen in over 90 years. (The film can be viewed on YouTube, but untinted and with German titles only; and a DVD, also scored by Horne, may be in the pipeline).

Subtitled Tragödie der Macht (Tragedy of Power), the film provides a fascinating glimpse of a period when Germany’s fragile new postwar democracy seemed precariously poised on the brink of total political and economic collapse, yet was possessed of a film industry capable of producing an ambitious, lavishly mounted production such as this.

Emil Jannings – already a star of international stature on the strength of his roles for Lubitsch, and later the first actor to win an Oscar – plays Robert Herne, a coal miner presented by a mischievous alien called Algol (played by John Gottowt) with a machine that renders coal obsolete as a source of energy and thus gives Herne the financial clout to suck the rest of the world dry. (Sound familiar?) The action spans twenty years, during the course of which Herne loses his wife and ultimately his marbles before finally going up in smoke with his diabolical machine.

The histrionic plot combining both anti-capitalism and anti-technology provides a rather slender framework for such an opulent production, but Hans Werckmeister (a quantity otherwise totally unknown to film historians, who died in 1929) directs with a firm hand. The acting is generally good; far less like stereotypical ‘silent film’ acting than that in Fritz Lang’s later and much better-known Metropolis, while the superb photography and production design (the latter by Walter Reimann, fresh from working on The Cabinet of Dr Caligari) consistently provides something interesting to look at. All in all, a dynamic and enjoyable relic of an extraordinary era both in the history of the world and of the cinema. Richard Chatten.

Richard Chatten has written for Film Dope, The Independent, the International Dictionary of Films and Filmmakers, The Encyclopedia of British Film, The Journal of Popular British Cinema and Cinema: The Whole Story. His favourite film is A Matter of Life and Death (1946).