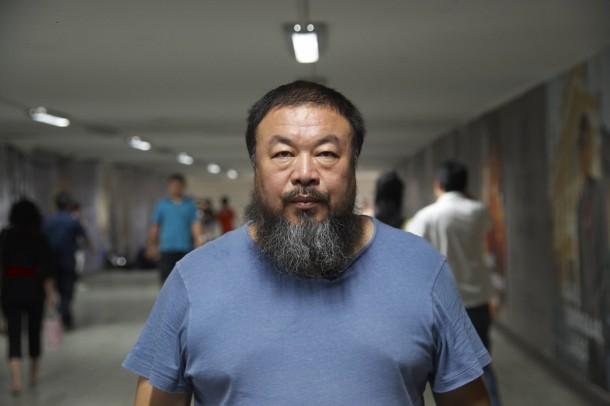 Released from prison after eighty days for a trumped up case of tax evasion, Chinese artist Ai Wei Wei returns to his walled-in residence at 258 Fake in Caochangdi for a year’s life under house arrest. Is Ai Wei Wei is the only Chinese artist we seem to hear about in the West: is he really as talented as we are led to believe or simply a con-man?.

In his abode the first impression is that the whole place is overrun by cats: later they will play with money bills which the artist has folded into little airplanes – the money came from all over China, people wanting to help him to pay off the fine of $ 2.2m he is charged with for his so-called tax fraud. While Ai cannot walk in the nearby woods anymore because he is followed, he strides along the parking lot near his property to keep an eye on the secret police officers. Later, after his house arrest is lifted, the hunted turns into the hunter: Ai chases the policemen in his car.

It is obvious that Ai is a very playful man and this irritates the solemn bureaucracy even more, because he makes fun of them. But western journalists are also the target for his biting humour: an American reporter, who wants to make a film about him, asks Ai for his input. Ai enjoys showering so he suggests a shower scene, to which the American reacts with horror: US-TV would never allow this from of nakedness. (Near the end of this documentary, Johnsen films the artist in the shower).

In China, his photograph ”One Tiger, eight Breast”, showing himself with eight scarcely dressed women, was forbidden as pornographic. Since Ai is not allowed to exhibit in China his new project S.A.C.R.E.D. which shows scenes from his life in prison, is shipped in six large boxes to the Venice Biennale.

Meanwhile, Ai remains positive about the political future in China: when the 80s generation grows up nothing will be the same any more – either the authorities will have to change or they will be blown away, he argues. His sanguine personality, his childlike enjoyment of pranks and his anarchic tendencies are well in evidence in Andreas Johnsen’s non-judgemental approach, the director maintains a serious stance regarding the political implications but never goes for a hagiographical approach, keeping both feet on the ground – just like Ai when he is not jumping in competition with his cats, trying to grab one of his money-planes. AS

SCREENING AS PART OF THE 3RD NORDIC FILM FESTIVAL