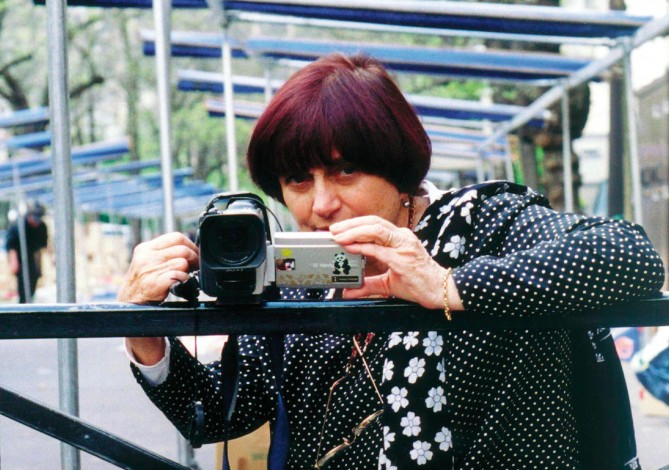 The Brussel’s born French filmmaker Agnès Varda became the first woman to be honoured by the Festival in Cannes on 24. May 2015 with an Honorary Palme d’Or, reserved for directors who have not won a Golden Palme, but whose life’s work deserves this recognition.

Born in 1928, Varda studied at the “Écoles des Beaux Arts” and, whilst living in Paris, met her husband Jacques Démy, also a filmmaker; the couple had a son, Mathieu, who is also a director. Rosalie, Varda’s daughter from her relationship with the actor Antoine Bourseilier (who starred in her breakthrough film Cleo from 5 to 7), is a custom designer and worked on Godard’s Passion (1982).

Varda, whilst being part of the Nouvelle Vague, had strong connections with the “Rive Gauche” cinema movement, which was strongly tied to the “Nouveau Roman” group of Robbe-Grillet, Chris Marker, Alain Resnais and Margarete Duras. Resnais would edit Varda’s debut film La Pointe Courte (1954), a mixture of fiction and documentary. Cleo from 5 to 7 (1961), about a singer who undergoes a biopsy for cancer, is about coming to terms with one’s mortality, a common theme in all Varda films.

After winning the “Golden Lion” in Venice 1985 for Vagabond, about a woman tramp, brilliantly acted by Sandrine Bonnaire, Varda spend the last years of the decade with her husband, Démy being struck by a rare illness, caused by cells ageing prematurely, leading to death. Just before Démy’s demise in 1990, Varda finished Jacquot de Nantes, a semi-autobiographical film about her husband’s childhood in Nantes. Her documentary The Beaches of Agnès won the César award in in 2009.

Varda’s strong personality enabled her to survive as the only woman director of the Nouvelle Vague. It is no accident that her feminism would dominate her work, as in La Bonheur (1965). Varda’s photographic background produces often still images in her films, often mixing them with moving images. She is still influenced by writers like Nathalie Sarraute and continues to use the unity of documentation and fiction of her debut La Pointe Courte, which she filmed in a small fishing village, for a terminally ill friend who was unable to visit anymore. MT