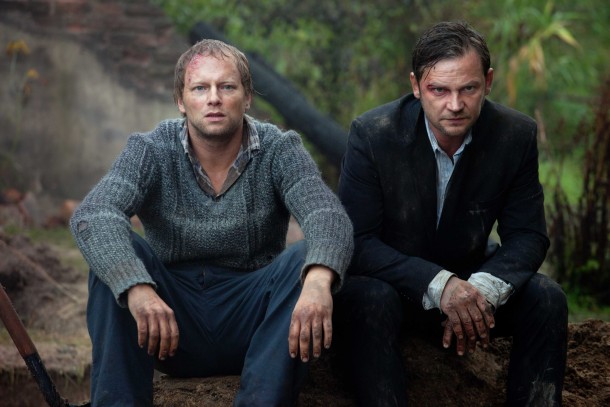 Wladyslaw Pasikowski’s holocaust-themed outing is inspired by Jan Gross’ book ‘Neighbours’ about the massacre during the Second World War of a Polish village’s Jewish inhabitants.  This Polish ‘secret history’ is filmed in a contemporary timeframe  (2000) and has the advantage of legendary cinematographer Pawel Edelman’s sumptuous visual treatment and an atmospheric and aptly-composed score by Jan Duszynski to keep the spooky storyline on a knife’s edge, thrumming with unexplained events and hostile characters.  That said, it sometimes feels like Pasikowski has bitten off more than he can chew with this tale of two brothers, Franciszek and Jozef Kalina, who come face to face with rampant anti-semitism when they discover old Jewish gravestones put to use as road-pavings in their childhood village.  The drama caused an uproar in Poland on its release due to its controversial storyline. And this is certainly one of the most important recent films concerning Jewish Polish history.

We first meet Franciszek Kalina (Ireneusz Czop) returning to the family farm after 20 years working in Chicago.  His homecoming is spoilt when he finds the mood in the parochial village is distinctly unfriendly.  The locals are still angry about him leaving of nearest and dearest in the lurch. But his brother Jozef (Stuhr), makes no effort to explain or make amends.  As the brothers set to work removing the Jewish tombstones and replacing them in their own field, the villagers rise up in scenes of outrage and hostility, threatening to beat them, even savagely killing their pet dog. When the pair start to dig deeper into local history archives, they discover that there is more to this grave desecration than first meets the eye.

With Pawel Pawlikowski’s recent drama IDA winning Best Film at the London Film Festival 2013; interest in the holocaust shows no sign of abating and Pasikowski has chosen another good story for this screen adaptation. The problem is that Franciszek and Josef are fairly unappealing, one-dimensional characters and the brothers are difficult to engage with, despite their heroic campaign.  This coupled with a total absence of any meaningful females leads (how can a village have no prominent women in Poland) apart from am occasional appearance of the local doctor and a brief vignette from a hospitalised old Jewish lady,  makes this a very dry, male-orientated story. As such, it feels rather worthy and preachy rather than involving as an emotive drama; the only sympathy and contrast coming from the Catholic priest (Jerzy Radziwilowicz). As the action builds to an hysterical climax, there is also a shift in tone from straight drama to histrionic melodrama as almost implausible skeletons gradually tumble out a cupboard heaving with anti-semitic overtones.  MT