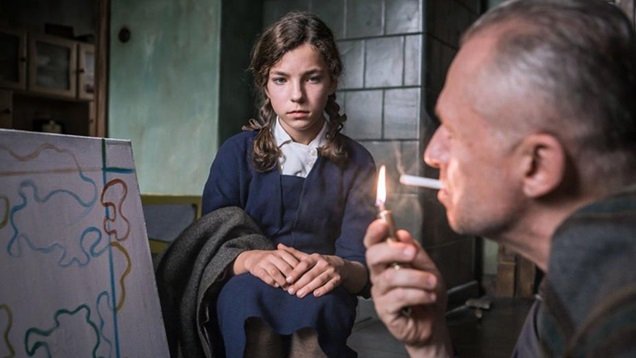 The last work of Poland’s most revered postwar filmmaker, Andrzej Wajda (Promised Lands, Pan Tadeusz), is a fiercely committed obituary of Wladyslaw Strzeminski, one of his country’s most strikingly visionary contemporary artists, victimised by the communist regime all the way to his death in 1952. As played by Boguslaw Linda, whose features bear more than a passing resemblance to both Wajda and Strzeminski, this is a fitting end note to Wajda’s career; the filmmaker recently passed away at the age of 90, leaving a filmography largely dedicated to crucial moments and leading characters in the history of his country.

The film stands as an imposing monument to the memory of a great artist although it’s clearly a festival item per excellence – after all, no film event would want to miss the last work of a grand master. This is an essential addition to the tragic cultural history of the communist era in Eastern Europe and the disasters wrecked by this totalitarian rule. Since Wajda’s career was launched at about the same time this story takes place, his intimate knowledge of the background is not necessarily the result of thorough research but also an expression of personal frustrations and pain he experienced himself through long patches of his own artistic life.

Strzeminski, born in 1893 in Minsk, now the capital of Belarus, and educated in St. Petersburg, lost an arm and a leg in WW1, despite which he attended the First Free State Workshops in Moscow and was close to such ground- breaking avant-garde artists of that period as Malevich and Chagall. In 1923 he moved to Warsaw to become one of founders of the constructivist group Blok.

A scholar, theoretician and art historian, Strzeminski formulated the Unism theory, an artistic conception based on the integrity of the universe which considers the levels of artistic, scientific and cultural achievements as an indication of social development. Most of his ideas about art in general and visual arts in particular are to be found in his posthumous Theory of Vision, published by his students after his death.

Wajda’s film, written by Andrzej Mularczyk, picks Strzeminski up in 1949, when he is about to be fired from his teaching job at the Higher School of Visual Arts in Lodz over preaching a modernity strictly opposed to the populist demands of the Communist Party.

The film’s plot follows the regime’s systematic efforts to break down this headstrong, unbending artist who refused to compromise on any artistic grounds whatsoever. A chain smoker and man of great personal charm, exclusively dedicated to his art who, notwithstanding his disabilities, was living on his own at the time – apart from irregular visits from his teenage daughter – he carried on teaching his devoted students in as much as was tenable.

With his work systematically destroyed and obliterated, Strzeminski was gradually deprived of any income, fired from the Artists Union and even denied the right to buy paints. Pushed into utter misery and forced to accept degrading jobs, only to be kicked out of them as well, he collapsed one day on the street, was taken to a hospital where he died of tuberculosis in 1952.

Wajda, whose early films (Generation, Kanal, Ashes and Diamonds) are considered definitive portraits of Poland of that period and who clashed often throughout his long career with the Polish communist regime (on films such as Man of Marble), evidently felt strongly for Strzemynski and his fate, seeing in him a symbol of the creative artist crushed down by a narrow-minded, ferociously dictatorial regime which allows no digression.

Lynda, one of his country’s leading actors, who was associated with most of the great films coming out of Poland in the 80’s and 90’s – including Wajda’s own Man of Iron – is probably the perfect fit for the role, not only because of his obvious thespian gifts but also his physiognomy.

A remarkably neat, correct, and historically faithful picture, Wajda’s passionate veneration for Strzeminski clearly led to a rather didactic approach. Characters are not too deeply probed, there are heroes we admire, villains we detest and nothing much in between, but some scenes, such as the funeral of Strzeminski’s estranged wife, the sculptor Katarzyna Kobro, and the moment when he finds out about her death, a few days later, are truly moving.

DoP Pawel Edelman are, as always, exquisite, but the art direction fills the screen with freshly made, antiseptically clean sets, seemingly never lived-in before. This may be rather out of tune, but despite it, the film still stands as an imposing monument to the memory of a great artist. AS